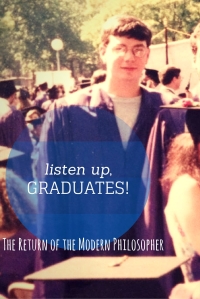 I cannot believe it’s been 25 years since I put on a cap and gown, sat in Washington Square Park, and said goodbye to NYU, Modern Philosophers.

So much time has passed since my graduation, and yet, I’m still not where I want to be in my life.

Am I to blame for that?  Did I not take life by the horns and do my best to chase my dream?  Was I too eager to just earn a decent wage and be safe?

Or is the reason much more obvious:  Did I not become the man I was meant to be because NYU arranged for a really horrible speaker at my graduation?

I’m going to have to go with that last one, Modern Philosophers.  After all, how could any of this be my fault?  I earned my BFA and was ready to take on the world, conquer Hollywood, and win my Oscar.

None of that has happened yet and I’m growing incredibly impatient.

Obviously, I screwed up by playing it safe.  One doesn’t become a successful screenwriter by taking an office job, settling down with his college girlfriend, and only writing when he can find the time.

I was raised to be conservative, avoid risks, and play by the rules.  How I ever managed to make it to Film School with that kind of upbringing is a minor miracle.  Clearly, I had enough of a rebellious streak to go against what my stepmother expected of me, but after four years of independence, I fell back in line like a lemming with a Film degree.

It’s never too late to start that rewrite of the rest of my life, so I’m still planning to live happily ever after.

Since there was no one around at my graduation to impart the words of wisdom that might have inspired me to chase my dream rather than live a nightmare, I’ve decided to conjure up some Deep Thoughts of my own.

These words, which would have been so helpful to me a quarter century ago, are my gift to the Class of 2016.

All they’ve got to do is read them and really give them a chance to sink deep into the gray matter.

If you’d like to read my epic commencement address, you can find it in this week’s column on The Good Men Project.  If there’s a graduate in your life who could use some Deep Thoughts from a wise man in a smart toga, please share the link with them.

My gift of the graduates is here: http://goodmenproject.com/featured-content/dear-graduates-lets-go-back-to-college-for-just-a-little-while-longer-ahodgens-jrmk/

Congratulations to the Class of 2016!

Native New Yorker who's fled to the quiet life in Maine. I write movies, root for the Yankees, and shovel lots of snow.
View all posts by Austin →
This entry was posted in Humor, Philosophy and tagged advice, Class of 2016, College, commencement speech, graduation, Humor, inspiration, Modern Philosopher, sarcasm, satire, The Good Men Project. Bookmark the permalink.