Sweaty Trump To Build A Wall Around The Sun 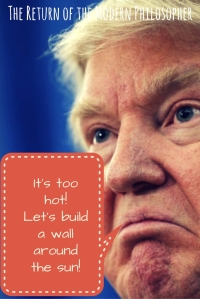 Why in the name of Zeus is it so hot in Maine on September 9th, Modern Philosophers?

I stepped out of my air conditioned office this evening and into 90 degree heat.  Maybe it’s a sign of End of Days.

Speaking of the Apocalypse, Future President Trump weighed in on this freakish September heatwave while on the campaign trail today.

“Obama has let this heat get way out of control, and we all know crooked Hillary wouldn’t handle it any better,” he continued after taking a long sip of Trump Water.  “When I’m President, we’re going to build a wall around the Sun and make the Martians or whoever the hell is out there pay for it!”

Snow Miser, thrilled with this plan, immediately cut a check for $20M to Trump’s campaign.  No word yet from Heat Miser, but everyone knows he’s a big time Bernie supporter.  I mean,  it makes sense that the guy would want to feel the Bern.

When asked how he planned to get close enough to the Sun to build a wall, Trump promised to “get the greatest minds in the country together in a room with NASA to figure it out”.  Not at all vague, at least as far as bold Trump plans go…

NASA would not issue a comment.  In fact, all calls to the space agency went directly to a voicemail which was just a recording of a group of people laughing hysterically.

I’m sure they will get back to me as soon as they complete their plans for the Sun Wall.

Meanwhile, back in Maine, the above is a photo of the view from my front porch.  Not only is the Sun scorching my little corner of the Earth, but someone also planted a palm tree on my property while I was at work.

What the hell is this world coming to, Modern Philosophers?

I swear it has something to do with the end of it all.  People have joked for months that the world would end if Trump were elected President, but I don’t think the punchline is as hilarious as most people think.

Today’s heatwave must be that Global Warming that Almost President Al Gore was always talking about.  If I’m writing about Donald Trump and Al Gore in the same blog post, then some serious bad $%^& must be going down.

Get your affairs in order, Modern Philosophers.

It’s the end of the world as we know it.

And I don’t feel fine.

I just feel sweaty and gross and like I want to scream at the top of my lungs for the world to wake up and see where it’s headed.