A Great Night For The Writer

Tonight is the Season Premiere of The Nite Show with Danny Cashman, Modern Philosophers, and I wish you were all in Maine so we could have a viewing party at The House on the Hill.

Unless you’re already on your way to the state that Stephen King built to hang out at my place, though, you’re going to have to use my blog as your wormhole to your favorite late night comedy show.

Of course, even though Maine is a magical place, Danny doesn’t just conjure up The Nite Show by shouting some obscure Latin phrases at the satellite dish over at WABI.

We actually have to gather at The Gracie Theatre on the campus of Husson University to make the TV magic happen the old fashioned way.  That’s what we did on Wednesday night, and now I’m going to tell you all about it.

Because it was a great night of television and entertainment.

And it was also a great night for the writer.

You know, the guy in the toga, who brings you this blog courtesy of the voices in his head.

I was pumped to be back at The Gracie.  It’s been a long, trying summer and I’ve been working far too many hours at the desk job, so I needed to unleash my inner Writer Boy for the sake of my self-confidence and crumbling mental status.

Right before the taping began, Danny came out to welcome the audience as he always does.  This time, however, he did something a little different.  He asked the writers to identify themselves, (I raised my hand with trepidation, fearing I was going to be forcibly removed by Danny’s goons, who I’ve never seen before, but clearly exist in my imagination) and then asked the crowd to give us a hand for all of our hard work.

It’s was an incredibly kind gesture that went a long way with this member of the writing staff.  I was truly touched.

And relieved to put aside my fear of heavy handed goons for the evening.

When we finally launched into the taping, after a hilarious cold open, Danny used four of my jokes in the first show’s monologue.

He then used four of my jokes in the second show, and three in the third!

I believe it was my second highest joke total for a single taping.  Apparently, my worries about shaking off the writing rust after a long summer hiatus were totally unfounded.

I should also point out that the audience laughed at all my jokes.  This hasn’t always been the case, of course.  The best example of that coming last season when one of my jokes bombed so badly that Danny snatched the cue card away from Luke, and then tore it to shreds that he scattered across the stage as the cameras rolled.

They can’t all be winners, Modern Philosophers.

When I got home, still riding my writer’s high, I shot off a quick email to Danny to thank him for the shout out to the writers, and for using so many of my jokes.

Danny sent back a delightful reply which included the line: “Your jokes kicked ass”.

Like I said, it was a great night for the writer.  I really wish you could have been there.

When people ask me what it’s like to go back for the first day of the new TV Season, I tell them it’s a lot like the first day of school after summer vacation.  Only without the stress of all the upcoming tests and homework assignments eating away at me.

Plus, there’s none of that “I’m about to see the Nuns again” anxiety that I had to deal with as a Catholic school survivor.  Thankfully, The Nite Show has a longstanding ban on Nuns, so I’ll never have to worry about running into one of them at The Gracie.

So maybe the first day back is more like the first day of Summer Camp, only without the lingering fear that Jason Voorhees might be lurking in the woods with a machete.

I can’t seem to get this right, so how about I show you what’s it like on the first day of the new season?  Here’s a behind the scenes look at the taping of the Season Premiere of The Nite Show…

The amazing NESCOM crew hard at work preparing for the show.  The Nite Show’s crew is made up of students from NESCOM, but you’d never know they weren’t seasoned pros.

Here’s a shout out to the kids in the NESCOM crew, who make sure that the funny gets properly captured on tape so it can end up on televisions across Maine on Saturday nights!

This was my view.  As a valued member of the writing staff (and the one who loads the audience into the theater), I get a prime seat in the second row.

The ladies sitting in front of me were big fans of Chris Fyfe, who was one of the musical guests.  They were also a tad rowdy and a lot of fun.

Why did the Season Premiere begin with Danny being escorted onto the stage by two members of Maine’s top notch law enforcement community?

Well, some things I just can’t talk about without Danny’s lawyer present.  Needless to say, we hadn’t had so much security on hand for a taping since Governor LePage’s last visit. 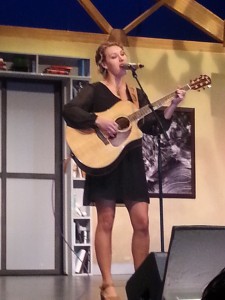 The musical guests for this week’s taping were not only amazing performers, but they were also quite easy on the eyes.

Anna Roman, pictured on the left, is a longtime member of The Nite Show family, who always performs Danny’s favorite Christmas Carol on the Christmas Special.

Lindsay Mower, pictured on the right, performed an original song as beautiful as she is.  Check out The Nite Show’s YouTube page for a web exclusive of Lindsay in action. 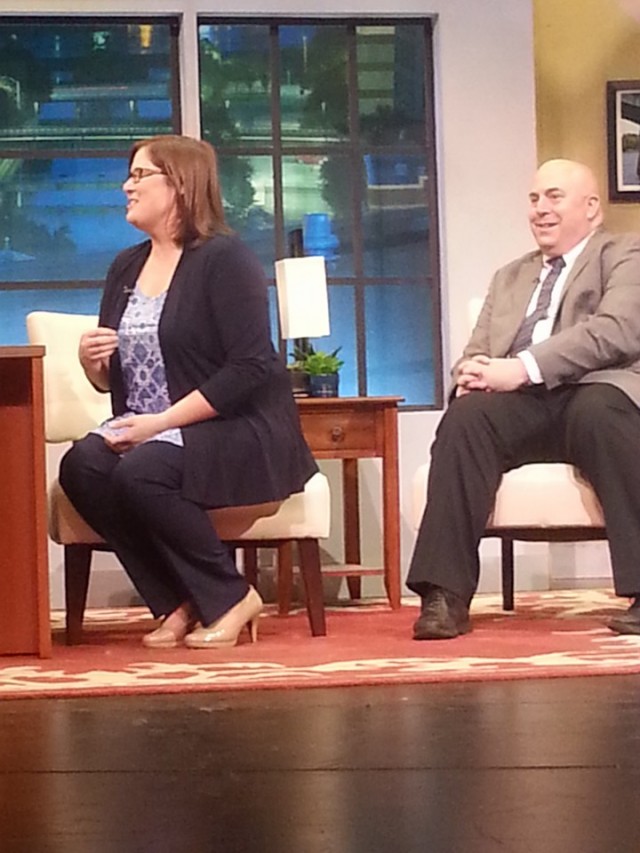 It should come as no surprise that a month before Election Day, many of my jokes that Danny used in the monologue were about Donald Trump and Hillary Clinton.

There are other races going on next month as well.  In one of them, Emily Cain, pictured above, is running for Congress against against one of my favorite monologue joke targets, Bruce Poliquin.

Since Emily was a guest, I got to write more jokes about Congressman Poliquin.  Hurray!

Yes, one of them made the cut.

Perhaps it was yet another dig at his height, or lack thereof… 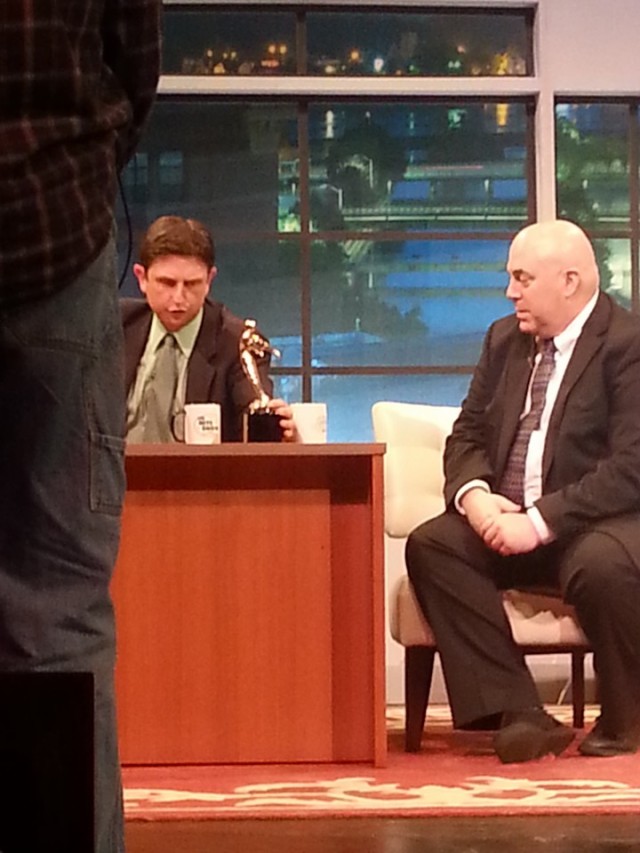 Danny proudly displayed the award on his desk.  Now that the show has finally broken the ice to take home its first award, can the ever elusive EMMY be far behind?

That’s a quick behind the scenes look at the making of the Season Premiere of The Nite Show.  If you live in Maine, I hope you will tune in tonight to check out the finished product.  In the Bangor area, it airs at 11:30pm on WABI.

If you don’t live in Maine, you can still support the show by liking its Facebook page, checking out videos on its YouTube channel (don’t forget to watch my TV acting debut in the Timbo the Intern sketch), or by following it on Twitter @TheNiteShowME.

It was a great night for this writer, and I can confidently say I wasn’t the only one who had an awesome time.  Thanks again, Danny, for letting me be a part of The Nite Show team!

4 Responses to A Great Night For The Writer