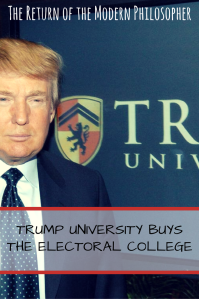 In a stunning development on the eve of Election Day, Wall Street insiders have announced that Trump University is attempting to buy the Electoral College.

Most political pundits agree that the only way Donald Trump could defeat Hillary Clinton and become the next President of the United States would be if the Electoral College were replaced by Trump University.

Apparently, the Billionaire Republican is in talks to make that happen.

Our Founding Fathers are turning in their graves.

A Trump campaign spokesperson denies that there is any correlation between this potential deal and tomorrow’s election.  “Mr. Trump has been looking for his next big business venture for months.  He’s always believed that Trump University could be an Ivy League caliber institution if it were to join forces with another, much more prestigious place of higher learning.”

While most people see this as a desperate maneuver by a megalomaniac with no clear grasp of how our political system works, America’s most outspoken narcissist had to make sure everyone knew they were wrong.

“I’m an incredible businessman, and I see opportunities everywhere,” Trump announced to anyone who would listen.  “I’m not going to stop making deals just because I’m about to trounce Crooked Hillary and make America great again.  Trump University is one of the largest jewels in the Trump portfolio, and this is the perfect time to take it out, shine it up, and put it on display.” 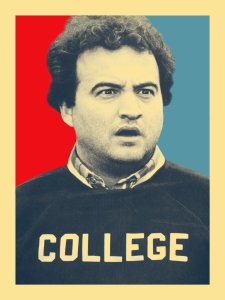 “The Electoral College has been around for almost as long as the United States,” he continued babbling because he loves the sound of his own voice.  “People respect the Electoral College, I know great people who have graduated from there, many of whom are now employees of mine.  It just makes sense for me to buy it and make it a Trump property.  I’m all about molding minds and educating the masses.”

Of course, Trump hasn’t always spoke so highly of the Electoral College.

Just last month, at a rally in Pennsylvania, Trump declared that the election was rigged because no one at the Electoral College would get back to his campaign about scheduling a rally on campus.

“Donald Trump has many fans on college campuses all across the country,” Trump explained at the time.  “The fact that the Electoral College won’t allow me to speak there, won’t let me share my message with its students, and won’t give me an honorary doctorate is all the proof I need that this election is rigged!”

Later that same night, Trump told a group of students at a rally on the campus of Penn State University that he would much rather party with them, and that students at the Electoral College had no idea how to have fun and enjoy the best four years of their life.

Ironically, if Trump were to win on Election Day, there’s no way in Hell that these next four years would be the best years of anyone’s life.

Except for Trump and America’s enemies.

So, Mr. Trump, if you’d like to wire me fifty million dollars, you have yourself a deal!

10 Responses to Trump University To Buy The Electoral College?