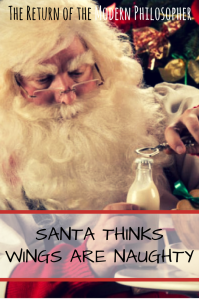 “He sees you when you’re sleeping, He know when you’re awake, He knows if you’ve been bad or good, So be good for goodness sake!”

I helped up a finger to indicate that I needed a minute.  I didn’t want to stop this rousing Christmas Day duet The Devil and I had going, but my mouth was on fire.

And by “on fire” I didn’t mean that my singing was amazing.  I meant that it was burning up from eating so many of Lucifer’s infamous Hell Fire Chicken Wings.

I chugged about half a bottle of Snapple and then took in a deep, refreshing breath of chilly Maine air.

Yes, it was cold in the living room of The House on the Hill.  I’m not exactly made of money, so I keep the thermostat turned low.  It’s not like it bothered my guest.

“These wings are the hottest batch you’ve ever brought me!” I declared as I took yet another sip of Snapple just to make sure the mouth fire was no longer burning.

“I wanted to make sure they were spicy enough to put the Hell back into Christmas,” The Prince of Darkness informed me with a chuckle.  “Can’t let the competition have all the fun on this big day.”

He picked a piece of tinsel off his impeccably tailored suit, and then reached for another chicken wing from the enormous platter on the living room table.

I did him one better and snatched two wings from the plate.  It was Christmas, so I had a right to pig out.  The diet could resume next week after New Year’s Day, which is another well known cheat day. 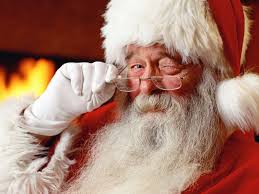 “You’ll never guess who won’t eat my Hell Fire wings,” Satan teased and then flashed a Devilish smile daring me to guess.

“I have no idea,” I somehow managed to mumble even though my mouth was full of chicken.

“Santa Claus,” The Devil revealed.  “With a belly like his, you’d think he’d eat everything.”

I gave him a dirty look as I stuffed even more chicken into my face hole.  I knew Lucifer and St. Nick were old friends, but still, you didn’t talk about Santa Claus like that.  Especially not on Christmas.

“Maybe the spices are a little too much for his stomach to handle,” I mused.  “After all, the stress of Christmas must already wreak havoc on his belly.  The last thing he wants is to tempt the delicate gastric fates with Hell Fire.”

“You have a point,” The Prince of Darkness conceded.  “He most definitely does not want to be flying around the world in that sleigh, that clearly doesn’t have a toilet, and suddenly have to deal with the run, run Rudolphs…if you catch my drift.”

He let out a sinister laugh that caused me to roll my eyes and bite my tongue.  There was no way I was going to be lured into a conversation about Santa Claus’ bathroom habits.  Such a chat would surely banish me to the Naughty List for life.

“Thanks for stopping by today so I wouldn’t be alone on Christmas,” I said sincerely and in the hopes of steering the conversation in a different direction. 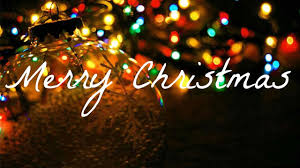 “You’re welcome,” Satan replied with a charming smile.  “There’s no reason for you to have a blue Christmas just because your heart is broken, and this holiday is a painful reminder of all the loves you’ve lost since you’ve moved the Maine.”

Hearing it put like that made me think that if I were to suddenly look up, I’d see the dark clouds forming above my head.  With my luck, they would then dump three feet of snow on me.

So instead of looking heavenward, I turned my attention straight ahead to the platter of Hell Fire Chicken Wings on the table in front of me.

I was going to eat my feelings this Christmas, while watching football and chatting it up with The Devil.  Maybe not the most traditional Christmas, but far better than my usual practice of sitting alone, hoping for a phone call or email that was never going to arrive, and wondering why both Santa Claus and love have abandoned me.

Merry Christmas!  Have a chicken wing…

2 Responses to Santa Puts Wings on the Naughty List