In a hastily called news conference just hours before the Times Square ball drop, Father Time promised that 2017 will not suck like 2016 did, Modern Philosophers.

“I resolve that the @#$% stops with me, and Baby New Year will bring a clean slate of 365 days filled with hope, promise, and positive outcomes,” Father Time declared and then let out a weary sigh.

When pressed on how 2017 would suck less, a clearly rattled Time tugged on his beard, threw his arms in the air, and shouted, “Obviously, there’s not enough beloved celebrities left alive for 2017 to top 2016’s body count, so Baby New Year has already got that going for him.”

The old man then snatched up his scythe, swung it threateningly in the direction of the press corps, and stormed off stage as questions and insults were hurled at him.

At that point, several large, angry, well-armed security guards stormed the stage, relieved Father Time of his scythe, and dragged him kicking, screaming, and biting out of our view.

Later, a spokesperson for Baby New Year took the stage to apologize for Father Time’s behavior your and to share a special message from The Babe.

“Baby New Year resolves to make 2017 the best year possible, given the fact that Donald Trump will be President of the United States.  He can assure you that 2017 can’t possibly be any worse than 2016, but he will not rest until 2017 proves to be unforgettable for all the right reasons.  Finally, Baby New Year gives you his solemn promise that he will never flip out and go bat @#$% crazy like Father Time did a few minutes ago.”

While I felt uncomfortable with the way Donald Trump loomed ominously over the press conference and the upcoming new year, Baby New Year did have a point.

There really is no way 2017 could be any worse than the year that (thankfully) ends tonight.  Unless, of course, President Trump starts a nuclear war.  If that happens, then we are obviously going to have a ton of celebrity deaths seeing as how Southern California would be an obvious target for incoming nukes. 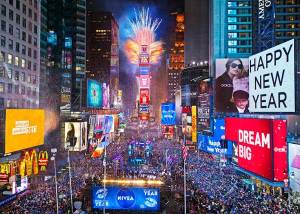 But if you choose to remain positive and take an adorable baby in a diaper and a top hat at his word, then 2017 will be a year of great things.

So go out tonight and celebrate, Modern Philosophers.  We’ve survived yet another journey around the sun, and the odds are in our favor that life will get better.

And if 2017 turns out to suck, you can take it up with Father Time next New Year’s Eve.  Maybe by that time, they will have come up with some meds to mellow him out, or someone will have the foresight to take away his scythe before the press conference.

Make it your New Year’s Resolution to follow me on this blog and on Pinterest.  If you do that, 2017 is guaranteed to rock!