I Had A Dream (It Was Pretty Weird) 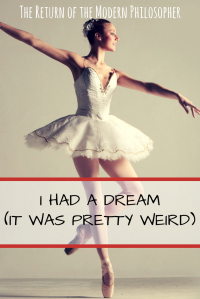 I celebrated it in typical Maine fashion by going to work.  Does it surprise you that an office open the day after Christmas would also be open today?

Despite my having to work on his holiday, I wanted to do something on my blog to honor this special day.

Dr. King is famous for, among many other things, his “I Have A Dream” speech.  I thought I would tip my hat to him why my very own “I Had A Dream (It Was Pretty Weird)” blog post.

Something tells me that no one will be quoting my words decades, or even days from now.  But if they make you laugh or think, even a little, then I’ve accomplished something.

So I had a dream last night, and it was pretty weird.

It was about my friend, who was a ballerina (but not one in real life), and begged me to attend her performance.  Now ballet isn’t usually my thing, Modern Philosophers, but I didn’t want to disappoint my friend, so I agreed to go.

The ballet was being held at The Second Generation Theater, which is right down the block from The House on the Hill.  It’s also where we used to tape The Nite Show before we moved to The Gracie Theatre.

The performance was pretty good.  At least I think it was.  It was my first time ever at the ballet so I had no true point of reference, but I was impressed by my friend.  She’s really easy on the eyes, and looked even more beautiful in her tutu doing her dancer thing.

When the show ended, however, one of the other audience members stood up and loudly booed my friend.  He said some pretty mean things about her, and I was pretty pissed.

To my surprise, the idiot in question was Donald Glover, the actor from Community, Atlanta, and the upcoming Young Han Solo movie.  Seriously, dude?

As much as I wanted to kick his ass, my friend needed comforting more.  It’s a very tiny theater, and I knew she’d heard every last mean word out of Mr. Hollywood’s mouth.

So I searched for a piece of paper to write down some kind words to give to my friend to read when she had the time.

I figured I could slip backstage, leave the note in her dressing room, and give her some alone time to process it all.  I didn’t want to see her crying in case she was embarrassed and my presence upset her anymore.

The only problem with my perfect plan was that I would not find any paper in the entire theater.  Finally, I came across a discarded newspaper and wrote my note on its pages. 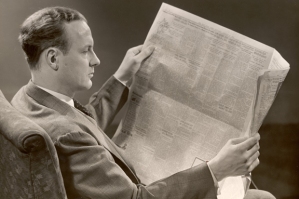 For the record, who still reads the newspaper?  Did I somehow time travel back to the 1950s and not realize it?  How crazy is this dream?

I went backstage, found my friend’s dressing room, and slipped quietly inside to leave my note.  The pretty ballerina was on the couch, however, crying her eyes out.

I apologized for Donald Glover’s horrible behavior, told her how amazing I thought she’d been, and handed her my note.

To my surprise and chagrin (it was really bothering me to see her cry, but I was afraid to try to hug her in case the act was too forward), she asked me to read it aloud because she was too upset to read it herself.

I granted her request and read the note, which was much sweeter than I remembered, and then she gave me a huge hug and cried on my shoulder.  Then she totally shocked me by  kissing me and telling me I was her hero.

That was when I woke up.  Time to go to work.  But what did that dream mean???

My guess is that I dreamed about the ballet because a character in the book I’m reading is a former ballerina.  The Next Generation Theater might have been in my head because I had written monologue jokes for The Nite Show on Sunday afternoon.

I recently saw Donald Glover on The Golden Globes, and I really want to see Rogue One, which might also explain why the star of an upcoming Star Wars flick was on my mind.

Why did I dream about this particular friend?  Why would I ever agree to go to the ballet?  Why was it so important to me to comfort her?  Why did her kiss wake me from my deep slumber?

I guess I’ll never know.  Dreams are just like that I guess.

Like I said at the start of all this, I had a dream and it was pretty weird.

Of course, if you want to take a shot at analyzing my dream, have at it in the comments section.  I’m eager to read your Deep Thoughts on this one.

Remember…no matter how weird it might be, never be afraid to have a dream!

Native New Yorker who's fled to the quiet life in Maine. I write movies, root for the Yankees, and shovel lots of snow.
View all posts by Austin →
This entry was posted in Holidays, Humor and tagged dream analysis, Humor, I had a dream, is Donald Glover a nice guy, Martin Luther King Jr Day, Modern Philosopher, sarcasm, satire, what does it mean to dream about the ballet, what does my dream mean, why do we cry in our dreams. Bookmark the permalink.

4 Responses to I Had A Dream (It Was Pretty Weird)