The Nite Show…Now With Rockets!

I am absolutely exhausted today, Modern Philosophers.  Yesterday,  I put in an eight hour day at the office job, and then headed over to The Gracie for last night’s taping of The Nite Show with Danny Cashman.

It makes for an incredibly long day, but it is well worth it.  I love being a part of The Nite Show team, and it is so nice to be appreciated for all the hard work I put in on the job.

Our last taping, scheduled for two weeks ago, had to be canceled because of a storm.  Before that, we taped in Westbrook, so this was our first time back in our home theater since December.

Modern Philosophers, there’s no place like home!  There was a huge audience, the guests were great, and the monologue jokes were excellent as the entire writing team was really firing on all cylinders last night.

And speaking of firing…we had rocket launches from the stage during the show!

Since I’m so beat, I thought I’d turn this into more of a photo essay.  I took a ton of pictures with my new phone, and I’d like to share them with you now.  Are you ready for a behind the scenes look at last night’s taping?

As I mentioned, we had rockets!  Our guests from the Maine Science Festival brought a rocket launcher, and they sent rockets flying into The Gracie, much to the delight of the packed house.

Of course, now that The Nite Show has working rockets, Saturday Night Live better watch out.  As our main competition, SNL might be on the receiving end of the next rocket launch as The Nite Show marches towards late night TV domination!

I love Joe’s reaction in this pic as the first rocket is about to be launched.  He must know he’s about to witness something both historic and terrifying. 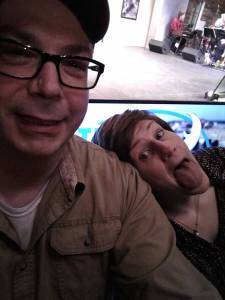 I do adore my Nite Show family.

In this photo, Joy bombs my obligatory geeky writer selfie and actually adds some class to the pic.

We all get a little loopy by the third show of the night, and it’s pretty evident here.

I was disappointed that Katie, my favorite member of the NESCOM crew, and Floor Manager to my Cue Card Guy, wasn’t in attendance.  I always seem to get a goofy photo of Katie to share on the blog, but there won’t be one in this post.

I just messaged Katie, and she told me she sprained her ankle in Boston over the weekend.  Just one more reason for this New Yorker to hate Boston!

Since Danny is always telling jokes that often depict President Trump, Governor LePage, and other members of the government in a disparaging light, we’ve had to increase security at the tapings.  Just in case the powerful people get too upset.

In this photo, you see Joe with his weapon of choice, which he must keep with him at all times.  Everyone on The Nite Show team knows to protect Danny first.

Danny’s Cashnac bit is a tip of the giant turban to Johhny Carson.  It was a fun challenge to mix it up a little and write some jokes for this skit.

I just wish Danny would let me try on the turban…

The NESCOM crew hard at work.  I always like to give a shout out to the students who do such an amazing job to make The Nite Show look just as good as the late night shows airing on the big networks.

I really liked the lighting in this shot, too…

Over the course of the evening, Danny explained that it was 20 years ago this month that The Nite Show first aired.

It has been on TV in three different incarnations over those two decades, and it has grown up to be quite the late night show.

I wonder how many monologue jokes Danny has told since the show first started.  Four years into my Nite Show gig, and I still love writing the jokes that kick off every show.

Of course, it’s gotten so much easier to write since Donald Trump has made himself available for punchlines, but most of the monologue still focuses on life in Maine.

Yes, Modern Philosophers, I did manage to slip a joke about Congressman Bruce Poliquin into the monologue.  How could we possibly celebrate St. Patrick’s Day without comparing my favorite Maine political target to a leprechaun?

Speaking of St. Paddy’s Day, here’s a shot from sound check of some members of the NESCOM crew enjoying a little Irish music from the evening’s musical guests.

Maine certainly has some incredible musical acts, and they all seem to end up gracing The Nite Show’s stage eventually. 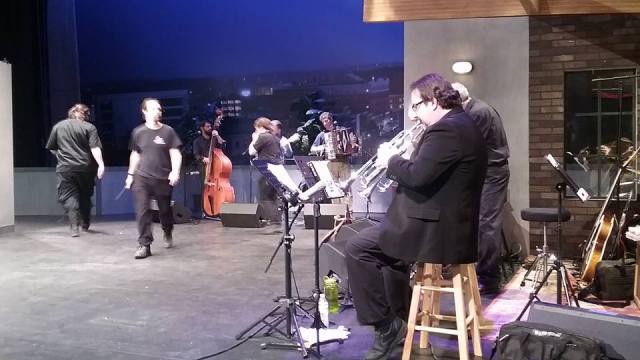 Brian Nadeau and The Nite Show Band rehearsing during sound check as the Irish lads set up in the background.

The Nite Show has such a great house band.    They keep the audience entertained during commercial breaks and they know how to trade witty barbs with Danny. 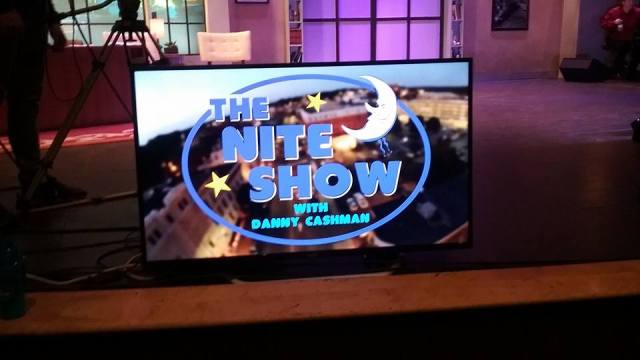 In a truly touching moment, Danny closed the taping with a very special musical guest: his Dad.  As he explained, Jack has been the only musical guest to appear on all three versions of The Nite Show, so it was only fitting that he should play us out as the show celebrated its twentieth birthday.

It truly was a magical night, Modern Philosophers, and if anyone says differently, please give me their name and coordinates.  We will answer them swiftly with one of our rockets.

Native New Yorker who's fled to the quiet life in Maine. I write movies, root for the Yankees, and shovel lots of snow.
View all posts by Austin →
This entry was posted in Humor, Writing and tagged behind the scenes, Danny Cashman, Humor, Modern Philosopher, monologue jokes, NESCOM, sarcasm, satire, television, The Nite Show, writing for TV. Bookmark the permalink.

13 Responses to The Nite Show…Now With Rockets!