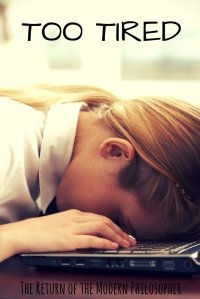 I don’t know if anyone let you in on the secret, Modern Philosophers, but today is Monday.

In case I woke up not knowing what day it was, I was quickly aware that today was the Mondayest of Mondays.

And, yes, I just used a word that isn’t real, but I’m a writer and we’re allowed to make up words.  It’s what we do.

Don’t fight it, or you’ll only make it Mondayer.

I have been exhausted from the moment I fell out of bed and hit my head on the bedside table.

I blame my fatigue on my new fitness routine.  As always, I dove in head first without even checking if there was any water in the pool.  We had a friendly competition going on at work over who could amass the most steps this weekend, and there was no way I was showing up at work today without the gold medal pinned to the front of my toga.

So I brought it, Modern Philosophers.  And I brought it hard.  All weekend long.  I put in 21,000 steps on Saturday, but even after all that effort I was still in second place behind one of our lawyers.

It’s always the lawyers, isn’t it?

I woke up Easter Sunday to find no basket waiting for me.  My calls to the Easter Bunny went unanswered, so I was pissed.

And how did I vent my frustration?

By going on an insanely long run one day after going on a run that was long enough to  be classified as having a few screws loose.

It was a gorgeous day, despite my being shunned by the Easter Bunny, and it was impossible for me to stay inside The House on the Hill.

So I’d write a little and then go for a walk.

All this and I was still trailing the legal eagle in the standings.  Unacceptable!

Every time I’d crack another thousand on my fitness tracker, I’d think to myself that this meant I now had to push myself to the next thousand.

What kind of irrational thinking is that?

It was obviously the thinking of a man who has been depriving himself of sweets and had a Facebook news feed filled with photos of Easter candy.

I wanted that victory.  I needed it.  I convinced myself that the prize for winning the fitness competition was the world’s largest whoopie pie, which would also somehow be magically fat free and very low on calories.

I finally collapsed on the couch after I hit 25,000 steps.  I put on my oxygen mask and slept like a baby.  I dreamed of a paradise where I got foot rubs all day.

Then I woke up this morning, and went for a long walk.  Hair of the dog and whatnot.

As a result, I’m healthier, twelve pounds lighter than when I started this program, and incapable of going more than fifteen minutes without springing up out of my seat to go for a walk.

Plus I won that damn fitness contest!

But now I’m too tired to write anything funny for the blog.  I’m sorry for my being a slave to my fitness tracker, but we all know how I get when I obsess over something new.

On a positive, non-exhausting note, the damn Easter Bunny found me at work.  I discovered this on my desk upon my arrival…

For the record, I have yet to eat a single piece of that coveted Easter candy.  Why blow my fitness plan out of the water after kicking so much rump over the weekend?

I chivalrously gave half of it to an attractive friend, who had lamented that the damn Easter Bunny had forgotten her as well.

As my Father once told me, “Do everything you can to make the pretty ones smile.”  I think dear old Dad would agree with his son’s decision to share his candy, especially on the Mondayest of Mondays.

I might be half asleep, but that doesn’t mean you can tiptoe away from here without first following me on my blog and on Pinterest!

Native New Yorker who's fled to the quiet life in Maine. I write movies, root for the Yankees, and shovel lots of snow.
View all posts by Austin →
This entry was posted in Fitness, Humor and tagged blogging, Easter Candy, exercise, exhausted, fitness challenge, Humor, Modern Philosopher, Monday, sarcasm, satire. Bookmark the permalink.

15 Responses to 2 Tired 2 Be Hilarious