Because of the ten year age difference, Chip was in high school and I was in first grade when our parents decided to Brady Bunch us into one big happy family.

I was a nerdy bookworm with absolutely no knowledge of music.  He was a popular high school jock who had a stereo in his room.

The first part of my music education began when I was half asleep.  Chip would wake me up at night by asking:

“What’s the greatest band in all the land?”

Apparently, the answer was “The Grateful Dead“, which I never understood because he didn’t seem to like them much.  While I never took a shine to the band, I did wear a Jerry Garcia Grateful Dead tie to my wedding.

The follow up question was always: “Who’s the Boss?”

That one was much more obvious.  Bruce Springsteen, of course.

The second part of my music education was a total immersion in Springsteen’s The River after Chip scored tickets to a concert on that tour.  In order to prepare for seeing Bruce live, he would play The River constantly on the crappy little record player he’d set up on the window sill in the kitchen. 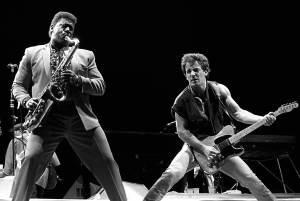 As Chip learned the words to every song on the album, so did I.  Of course, this led to my wanting to listen to more Springsteen.

Born To Run opened my mind to how badly a nerdy kid like me needed a little rock and roll in his life on a daily basis.

That album is packed with classics.

And Chip made sure I always had access to The Boss’ music.  Every Christmas, I’d wear out the recording of Springsteen’s Santa Claus Is Coming To Town that he made for me.

The first cassette that I ever bought was Born in the USA.  I can still remember how excited I was to walk out to 86th Street with my hard earned cash in my pocket to make that purchase.

And when I got home, I sat in the room that I’d inherited from Chip when he went off to college, and listened to that tape over and over on the stereo he’d left behind.

That summer, when the Born in the USA tour was rolling through New York, I tried to win tickets on the radio.  I never did get a ticket, but I would listen every night to the local station as it broadcasted live from outside Giants Stadium during the shows.  Every once in a while, they’d play a snippet of a song from the concert.

I made a vow that I would some day see The Boss live.  Eventually, I caught him at Madison Square Garden as part of the Tunnel of Love tour.  Greatest concert I’ve ever attended.

I prepared for that evening by listening to the album over and over again, just like Chip had taught me during The River tour.

To this day, whenever a Springsteen song comes on the radio, I crank it up and sing along.  Poorly, but passionately.

I’m not very close to my family anymore, and haven’t seen or spoken to Chip in probably twenty years.  Life is like that.  He moved to Virginia.  I headed out to California and then came back across the country to settle in at The House on the Hill.

Yesterday, my sister called me at work to tell me that Chip had passed away in his sleep.

The shock of it caused me to break down and cry in the hallway.  I went into my friend’s office, grabbed a few tissues off her desk, and told her what had happened as I wiped away the tears.

For the rest of the day, random Springsteen songs would pop into my head as I tried to process the fact that Chip was no longer with us.

I wanted to end this post with a video of The Boss in concert, and I’ve chosen my favorite song from The River.  I think the title is fitting given that even though we were estranged, there was always a bond that tied us together.

That tie was Bruce Springsteen.  Rest in Peace, Chip.  Make sure to wake up the angels every night to quiz them about who’s The Boss…

Native New Yorker who's fled to the quiet life in Maine. I write movies, root for the Yankees, and shovel lots of snow.
View all posts by Austin →
This entry was posted in Humor, Philosophy and tagged a death in the family, Born in the USA, Bruce Springsteen, childhood memories, coping with loss, family, Modern Philosopher, music, stepbrothers, The RIver, The Ties That Bind. Bookmark the permalink.

45 Responses to Intro to Springsteen