One Hell of a Yankee 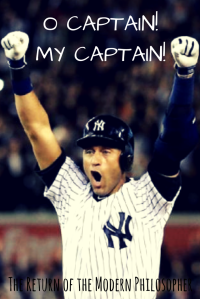 “I didn’t miss the ceremony, did I?” The Devil asked anxiously as he rushed into the room carrying a tray of his famous Hellfire Chicken Wings.

His impeccably tailored suit was pinstriped today, just like Yankees pinstripes, in honor of the team’s retiring Derek Jeter’s number.

“I would not allow them to begin until you arrived with the wings,” I assured my guest as I hungrily grabbed several wings off the platter.

I was wearing my Yankees jersey over a Yankees tee shirt.  I also had on my Yankees cap.  It wasn’t as fashionable as Lucifer’s outfit, but it was just as classy.

“So was Jeter your favorite Yankee?  He’s definitely mine,” The Prince of Darkness barked out excitedly.  “Number 2 was always number 1 in this Devil’s heart.”

I had to smile at his schoolboy giddiness, and rewarded it with an ice cold Snapple fresh from the cooler.  I took a sip of my Snapple and wiped Hellfire Sauce from my lips before I answered his question.

“Don Mattingly will always be my favorite Yankee,” I informed him.  “His career was cut short by injuries, though, and he retired the year before Jeter’s teams began their dynasty.  Jeter was definitely my favorite once Donnie Baseball hung up his spikes.”

“What’s not to like about Derek Jeter, am I right?” Satan continued to gush as he nibbled on a wing.  “He was so clutch at the plate and in the field, he never played at a speed less than full throttle, he was a leader and a true champion, and he was great with the ladies.”

“Sounds like you have a bit of a man crush,” I chuckled.

“Nothing wrong with that!” The Devil agreed.  “I’m just glad the Yankees are playing so well now, and that they didn’t completely fall apart when he left.”

“This new youth movement with Judge, Sanchez, and Byrd reminds me of what it was like when they called up Jeter,” I commented as I grabbed more wings.  “The Yankees have always been about winning now, so I understand that’s why they pay big money for proven veterans, but I much prefer the excitement of calling up the young guns and seeing if the next Yankee great is among them.”

“Amen to that!” Lucifer concurred and tapped my bottle with his.  “Contrary to popular belief, money cannot a World Series trophy.  You actually need talent.”

I shook my head in agreement as I worked to swallow all the chicken I had in my mouth.  Then I washed it down with a huge gulp of Snapple.

“I just wish Jeter had been able to play long enough to break Rose’s hits record,” I lamented and reached for my next wing so I could eat my feelings.

“I bet Major League Baseball feels the same way,” The Prince of Darkness mused.  “Pun intended, of course.  I’m sure they’d prefer the squeaky clean, almost angelic Jeter to hold that record over the tarnished player who’s been banned from the game for life.”

“Everyone prefers an angel I guess,” I quipped with an evil grin.

“Don’t push your luck, or I will make these wings vanish with a snap of my fingers,” Satan warned with a devilish smile.

“Fine,” I conceded.  “Besides, it’s time for us to stop with the witty banter and to watch them honor one Hell of a Yankee…”

Congratulations, Derek Jeter, on having your number retired tonight!

6 Responses to One Hell of a Yankee