Why, yes, I have lost some weight, Modern Philosophers.  Thanks so much for noticing!

I’ve been as giddy as a schoolgirl at a One Direction Concert about the recent success of my new fitness program, but I’m also a Glum Gus because no one has told me I look thinner.

When I saw The Other Melissa recently, I asked her if she could tell I’ve lost weight (primarily since she had pointed out that I had put on weight during our three years apart).  She just shrugged and told me I always wear baggy sweats so it was hard to tell.

Doesn’t she get how friendship works?  You tell the Fat Boy he looks slimmer in order to encourage him to work harder at it.  Especially when you are an extremely attractive woman because your words will obviously inspire him even more.

I don’t know what’s wrong with her.  But I digress…

Mel did have a point, though.  I had taken to camouflaging my weight gain by wearing baggy clothes.  I was embarrassed and felt horrible about how I looked, so I did my best to hide it so I could still go out in public.

Well, go out as much as an introvert like me feels comfortable doing.

Now that I’ve lost 22 lbs, I have noticed that my Fat Boy clothes are on the verge of becoming too humongous for me.  I’m on the next to last notch on my belt, and I’m pretty sure I could hide a frozen turkey under my shirt.

I’m hesitant to pull the Thinner Guy clothes out of mothballs, though.  First off, mothballs stink, and it’s difficult to get that stench out of clothes.  Second, and more importantly, I’m afraid I’m going to jinx things.  I’m strangely superstitious.

What if I start wearing a smaller size, get cocky and lazy, and then everything gets tight again in a couple of week?  I’d rather have my clothes billow wildly in the Spring wind than anger the Weight Loss Gods at this point.

I suppose this means that I just have to accept that no one is going to notice my weight loss and I’ll have to live without compliments a little longer.

I guess I can handle that.  Besides, I’ve heard that compliments are high in calories.

Speaking of how in calories, do you have any idea how badly I’m craving an ice cream sundae right now?  The temperature shot into the 70s today, and I went for a long walk on my lunch break.  Mind you, that’s after I went for a three and a half mile run this morning.

And that, Modern Philosophers, is how you lose 22 lbs!

But back to my ice cream story.  After that long walk in the heat, I was perspiring a tad and wanted to cool off quickly. 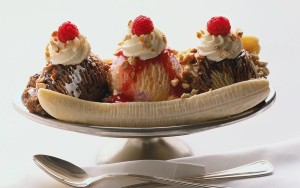 And what better way to lower one’s body temperature than by devouring a bucket of ice cream?

I have not had even a scoop of ice cream since I started my torture…I mean…fitness program.   That sort of self control is necessary if I ever want to wear my Thinner Guy clothes again, so I am very proud of myself.

But I still want some ice cream.  And a few compliments.

Is that really too much to ask?  I know I’m doing this for me and to improve my health, but a few pats on the back and some encouragement would definitely push me to work harder.

Especially if those compliments were to come from the ladies.  As hard as it is to believe, this neurotic mess of a man is still very single.

Working hard on changing that, too.  Trust me.

Alright, I need to wrap up this post so I stop salivating over that pic of the ice cream sundae.  Thanks for indulging me for several hundred words.  Talk to you soon…

You should follow my blog.  I’m on Pinterest, too!  Don’t give me any ice cream, though, no matter how much I pester you for it!

Native New Yorker who's fled to the quiet life in Maine. I write movies, root for the Yankees, and shovel lots of snow.
View all posts by Austin →
This entry was posted in Fitness, Humor and tagged diet, exercise, fat boy clothes, getting back into shape, health, Humor, Modern Philosopher, running, sarcasm, satire, weight loss. Bookmark the permalink.