Pope Bathes In Holy Water For Days After Trump’s Visit 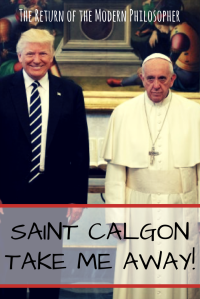 Pope Francis was so effected by President Trump’s recent visit to the Vatican that the Pontiff bathed in holy water for several days after the Orange Menace departed.

“The Holy Father wanted to ensure that he did not become possessed by whatever evil has taken over Mr. Trump’s body,” a Vatican spokesperson explained.  “While Pope Francis has faith that God will protect him from any demons, he decided he would rather be safe than sorry.”

According to Vatican historians, this is the first time that a Pope has felt the need to take such measures after hosting a world leader.

When asked how he felt about making history, President Trump responded, “I’ve always known that, like Rudolph the Red Nosed Reindeer, I would go down in history.  I’m very special.  No President has been more historic than me.  Sorry, Ben Franklin, but you’ve been replaced.  By me.  Donald Trump.”

Pope Francis contacted this Modern Philosopher by Skype to discuss his visit from the person recently voted by Vatican staffers as The World Leader Least Likely To Be Canonized.

“I am normally a very welcoming host, but I could not wait for that man and his entourage to be out of the Vatican,” The Pontiff told me as he made the sign of the cross.  “I was this close to pulling an Angels & Demons and vanishing into one of the numerous secret tunnels just to avoid them.”

When pressed for details on why he felt so uncomfortable around The Trump Circus, the Pope finally gave in and shared some juicy tidbits.

“His wife made me very uneasy,” he offered.  “Something in her eyes told me she was in terrible danger, but her  body language conveyed that she would destroy anyone who dared invade her personal space.”

“She kept trying to order drinks from me.  Apparently, anyone dressed in white is a servant to her.  While I consider myself God’s humble servant, I was not going to hustle up a cocktail for her just so she could better tolerate her husband.”

The Leader of the Catholic Church shared numerous stories about Donald Trump, but this one was my personal favorite…

“I kept trying to discuss the ways President Trump could change his policies to make the world a better place, but all he wanted to talk about was interior design.”  Pope Francis paused to let out an elongated, heavy sigh.  “He absolutely had to know who designed the Vatican because he wanted every Trump Hotel and Casino to look like it.  He was so determined that he offered me nuclear weapons to protect Vatican City from terrorist attacks if I would just give him my interior designer’s contact information.”

As it turns out, multiple baths of Holy Water were not the only measures taken by Pope Francis after Trump’s visit.

Multiple sources within the Vatican confirm that the Holy Father called in an exorcist to make sure that “the great orange evil” had not lingered. 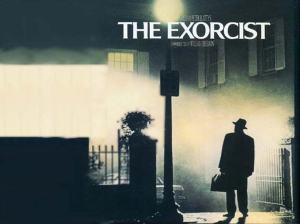 “Yes, I did ask Monsignor Blatty to visit,” The Pontiff confirmed with an embarrassed chuckle.  “I kept waking up in a cold sweat with a sense that something evil had been watching me as I slept.  I know the difference between a nightmare and the presence of an evil that must not be allowed to gain a foothold in this realm.  Monsignor Blatty has assured me that I should have no trouble sleeping now.”

Has anyone made sure that Steve Bannon didn’t get left behind?  He could probably survive for ages in the Vatican’s tunnels and secret passages.

Don’t worry, Modern Philosophers.  Before I ended our Skype session, I asked Pope Francis to say a prayer for America.

And I convinced him to give me Monsignor Blatty’s phone number.  I have a feeling that  his services might be required at the White House if we are at all serious about making America great again…