The Lesser of Two Devils 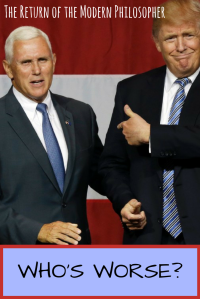 “I was reading your blog earlier,” The Devil informed me as he entered the living room with a new six pack of Snapple to put in the cooler.  “I thought the responses to your last two posts were rather intriguing.”

Although he loaded the cooler like a down to earth bartender, he was dressed like a pompous business executive about to lay off an office full of employees and then reward himself with a seven figure bonus.

As was his custom, my guest wore an impeccably tailored suit that was worth more than the current Kelley Blue Book value of my car.

“First off, thank you for reading my blog, and I mean that sincerely.  It doesn’t seem like anyone else is reading it these days,” I replied with the pout of a writer who was frustrated because all his hard work was going unread.  “What was it that you found intriguing?”

Lucifer handed me one of the last two cold bottles of Snapple in the cooler, and then took the last one for himself before he sat down on his end of the couch.

“You wrote about Donald Trump on Friday and Mike Pence on Saturday,” he explained after taking a long sip of his beverage.  “Your readers agreed that Trump was a problem and had to go, but then they seemed to be just as afraid of Pence taking his place.”

“America is in quite a pickle,” I agreed and then downed half of my Snapple.  “The Electoral College really screwed us over good.”

“That does seem to be the case, and it supports my thinking that a good dictatorship is exactly what people need,” The Prince of Darkness countered with a devilish smile.  “You don’t ever hear of anyone in Hell talking about getting rid of me.” 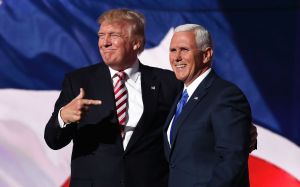 “That’s probably because you’d rip out the tongue of anyone who dared speak against you, and then banish them to a ring of Hell where all of history’s worst dictators fight it out for ultimate power over The Damned.”

“I never lay a hand on any of my subjects,” Satan educated me.  “I have Demons to do that sort of thing.”

“Additionally, I do not have a ring of Hell like the one you described, and now I’m wondering why not.  This is why I need you to work for me.  There aren’t many big idea types rotting away in Hell for all eternity.”

“Thank you for the job offer, but I’m going to have to pass,” I politely declined.  “I’m already dealing with a Hell on Earth scenario, and I don’t think I want to upgrade to a Hell in Hell one.”

I chugged the rest of my Snapple and placed the empty bottle on the table.  I was ready for another, but the new supply wasn’t cold yet.  What sort of new Hell was this?

“Look, buddy, I know your love life isn’t going very well, but if you refer to it as a Hell on Earth scenario, things are never going to improve,” The Devil mocked me with a chuckle.

“You are hilarious,” I answered with mock laughter.  “I bet there’s a ring of Hell dedicated to your doing stand up 24/7.  Probably a two drink minimum, too.” 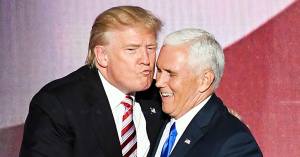 “We’re getting very off topic here, but I’m sure the witty banter is a big hit with our audience,” Lucifer reminded me.  “Would it be an even worse situation if Trump quit, got arrested, or was impeached and Pence became President?”

I just shrugged.  I honestly had no idea.

“That’s a bridge we’ll have to cross, and possibly have collapse right out from under us, when we get to it,” I told him with a heavy sigh.  “I’d like to think that Pence couldn’t be any worse than Trump, but they seem to be cut from the same cloth…”

“The kind of cloth the Klan uses for its robes?” The Prince of Darkness asked.

How do you answer a question like that without getting yourself into trouble?  I think the best thing to do is to just end the story right here…

1 Response to The Lesser of Two Devils