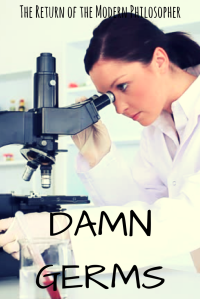 I’ve never been an ace at Science, Modern Philosophers.  That’s why you’ll see me in a toga, but never in a lab coat.

Because of this shortcoming, I am forced to keep a team of scientists on retainer to help me whenever a scientific issue arises.  It cuts into the blog’s profits, but my inner Boy Scout insists that I always be prepared.

This was one of those days when Science was giving me a brain cramp, so I had to venture down into the cellar of The House on the Hill to visit my nerdy lab coat posse.

I did mention the scientists live in my basement, right?

What I needed to know today was why sweat couldn’t kill germs.

Let me give you the backstory on how this issue bubbled to the top of my forever simmering pot of Deep Thought stew.

I woke up in the middle of the night convinced that a monster was loose in the house.

The sounds that had roused me from a wonderful dream about a successful date (it had to be a dream if I was on a date that was going well!) were horrifying.  I reached for the bat and holy water that I keep next to the bed, and prepared to battle whatever evil had risen from the underworld to steal my soul.

I didn’t get more than ten feet before my sleepy brain snapped to life and came to the realization that the noises were coming from inside the bedroom.

More specifically, they were coming from my stomach.

In a moment of panic, which I am very embarrassed of now that I’ve had time to look back at it, I feared that I had either swallowed a Demon in my sleep, or an Alien was about to explode out of my stomach.

That was how disturbing the noises were.  The cat was cowering under the bed.  I was freaked out beyond words.  I had awakened into a nightmare.

I had vowed to not become its next victim.  I’m a big baby when I’m sick, and I’m really not in the mood to change diapers and deal with late night bottle feedings.

But the silent marauder had managed to sneak up on me in my sleep.  Why it was too frightened to deal with me face to face is beyond me, but most likely a testament to how bad ass and imposing I am.

Regardless, there was something going on in my stomach that sounded like a bunch of drunks with no musical background trying to play a concerto while a colony of cats in heat sang along.

Needless to say, I didn’t get much sleep last night, and when morning finally revealed itself, I couldn’t find the energy to crawl out of bed.

I suddenly found that energy, though, when my stomach determined it was time to lock myself in the bathroom and never again leave the toilet.

I considered contacting Pope Francis via Skype to ask for Last Rites, but I was afraid that smells could somehow be transmitted over the internet.

Like I said earlier, Science isn’t really my thing, so in my moment of severe stomach distress, it made sense that a Scratch-n-Sniff Skype was a possibility.

Once I managed to escape the bathroom, I was delirious, overtired, and looking for a miracle to set me free from whatever colony of germs had taken up residence inside my body.  A body, mind you, that is now in the best shape it’s been in ages.

I couldn’t just surrender it to this hostile takeover on a molecular level.

So I did the only thing that makes sense when your brain is not functioning properly, and your bowels are functioning way more than they ever should…

I went for a run.

I know it sounds ridiculous now, but in the moment it seemed like the kind of brilliant idea that lands a guy on the cover of Time or wins him a Nobel Prize.

The way I saw it, the germs were trying to take control of a body that I had worked relentlessly to get back into shape over the last six months.

There was no way I was going surrender the bridge and allow the enemy to win.  Not on my watch.  Not over my weekend!

In the Weird Science that exists only in my mind, sweat would drown germs.

I mean, since I can’t swim, shouldn’t that mean germs in my body couldn’t, either?

Even though I usually run at least six miles on Saturday, I knew that would not be possible today.  Not with the Discordant Symphony jamming in my belly.

Going four miles seemed like a reasonable plan, however.  And if I cut down all the little side streets on my route, I could manage to stay within a mile of The House on the Hill, should the need for an immediate gastro evacuation or Alien birth arise.

Four miles would generate more than enough sweat to drown even the most stubborn germs.  Math has always been my thing, so I ran the numbers twice and was confident in my brilliant plan.

I somehow managed to run five miles.  Because, as one Facebook friend commented, I am a machine.  Once I’m out on the road, I’m too focused on the run to hear even the most violent protests of my stomach.

When I returned to The House on the Hill, I showered, scrambled some eggs, and then  trudged down to the basement to visit the Nerd Herd.

As always, the scientists were thrilled to see me.  They crave any human contact.

They were excited to solve whatever scientific query I hurled at them.  Not that they would be able to catch it…these eggheads are not at all athletic.  But they are really adept at picking up things and transferring them to their massive chalkboards for review.

Gotta tell you, Modern Philosophers, I was not at all happy when the Head Scientist informed me that sweat could not kill germs.

When I demanded to know why, Dr. What’s His Face just smiled and replied, “To put it as basically as possible, the sweat is on the outside of your body, and the germs are inside it.  There’s no way for them to interact.”

All that money paid to have the answers at my fingertips, and they can’t even give me the answers that I want.

This is why Science sucks, Modern Philosophers.  Now please excuse me, while I try to build something to muffle the earsplitting sounds emanating from my belly.

Native New Yorker who's fled to the quiet life in Maine. I write movies, root for the Yankees, and shovel lots of snow.
View all posts by Austin →
This entry was posted in Fitness, Humor and tagged Fitness, Flu, germs, Humor, life hacks, Modern Philosopher, running, sarcasm, satire, Science. Bookmark the permalink.