“What if everyone on Earth finally decided to live a life free of sin?” I broke the Sunday silence at The House on the Hill with a deep, philosophical question.

The Devil turned to me from his end of the couch, gave me a most puzzled look, and then went back to reading the newspaper.

“It’s never going to happen,” he blew me off without even looking me in the eye when he said it.

“I’m serious,” I persisted.  “What would you do if there were no new souls being sent to Hell?”

Lucifer sighed and put down the newspaper.  As always, he wore an impeccably tailored suit that probably cost more than my soul would fetch on the open market.

“There is no way everyone in the world would suddenly give up sin and lead saintly lives,” The Prince of Darkness informed me like a true authority on the manner.  “There’s always going to be that one bad egg, who will see an opportunity in the situation, and break any and all of the sacred commandments in order to capitalize on it.”

“You really have a bleak outlook on the world,” I commented as I reached into the cooler for a Snapple.

“Given my line of work, I’d say that makes perfect sense,” Satan quipped with a chuckle.  “Just look at your Oompa Loompa of a President.  Men like him will always exist and try to exploit the system for their personal gain, while also using their power and money to keep down anyone who is not like them.” 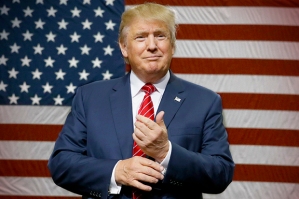 “But the world is sick of Trump and his kind,” I argued.  “Good people will finally vote them out of power and those dinosaurs will eventually die out.”

“You are so adorably naive,” The Devil mocked me with a smile.  “The Trumposaurs might become extinct, but they will merely be replaced by others hungry for power.”

I took a long sip of my Snapple while I pondered what he had just said.

“So you believe sin is eternal?” I finally queried.

“I sure hope it is,” Lucifer replied with a devilish grin.  “But let’s say for a moment that your scenario does eventually become a reality.  Everyone is good.  No one ever does anything wrong again.  It still wouldn’t put me out of business because Hell is packed with guests whose rooms are booked for eternity.  Even if I never get a new arrival, I’ll be forever occupied tending to those already entrusted to my care.”

“So we’ll always have Hell,” I mumbled.

“Talk about job security!” The Prince of Darkness beamed.  “Not only I am guaranteed a job until the end of time, but I also get to do something I love.”

His beaming smile disgusted me, so I turned on the television in search of a distraction.

While I never expected the world to go completely sin free, it was depressing to realize that the sins of our past would forever haunt us.  I guess that’s what I get for trying to start a philosophical conversation with Satan…

1 Response to We’ll Always Have Hell