“Looks like you’re really making progress on your time machine,” The Devil commented as he returned the blue prints he’d been examining to the living room table.

As always, my Sunday guest was dressed in an impeccably tailored suit, the cost of which was probably equivalent to how much I needed to pay for additional parts to complete the aforementioned time machine.

However, I knew it was highly unlikely he’d ever part with such a precious piece of his wardrobe and allow me to hock it for machinery.

“I’m definitely closer to completion, but I still need Doc’s help with some of the calculations and in securing a power source,” I replied glumly.

Building a time machine required a lot of money, technical knowledge, and scientific skills.  I wasn’t exactly flush in any of those categories, so I’m not sure what had possessed me to ever undertake such a project.

Oh, yeah…it had something to do with my life sucking big time, and wanting to go back to change things in hopes of making it better.

“I know there are so many moments you plan to go back to revisit once the time machine is ready, but I’d now like to propose a philosophical time travel question for your consideration,” Lucifer remarked with a devilish grin on his handsome face.

“I like those kind of questions,” I responded excitedly as I fished a bottle of Snapple out of the cooler.  “Hit me with it, Big D.”

The Prince of Darkness gave me a look, which I took to mean that he didn’t like being referred to as “Big D”.  I made a mental note to use that nickname again later when I wanted to get under his perfect skin. 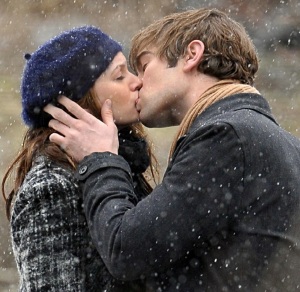 “If you could travel back to your first kiss, what, if anything, would you change?” he asked as he stared at me intently.

I cringed a little at his stare.  It was making me uncomfortable, but I was too into answering this time travel question to let it throw me off my game.

I took a long sip of Snapple as I tossed around some Deep Thoughts in my brain.

“I’d change the person with whom I shared my first kiss, and I’d definitely make sure it happened years earlier,” I told him.

Satan smiled.  I definitely had his attention.  “So your first kiss wasn’t absolutely perfect?”

I shrugged.  “I wouldn’t say that.  It just didn’t happen until my senior year of high school, which I know now was a clear sign that I’ve never understood how to act on my feelings, or to be comfortable around members of the opposite sex.”

“Better late than never,” The Devil quipped with a soft chuckle.

It was a very judgmental chuckle.  Seventeen years old for a first kiss was way beyond late bloomer.  I considered myself lucky I even got that smooch before heading off to college.

“So who should have been on the receiving end of that monumental moment in your life?” he asked as he popped the top off a bottle of Snapple.

“Cathy {last name redacted by the blog’s lawyers},” I answered without any hesitation.  “I fell for her on the first day of fifth grade, and even though we were in the same class through eighth grade, I was too afraid to speak to her, let alone ask her out.”

“First love is rough,” Lucifer agreed.  “But even more so when you don’t act on it, or even give yourself any hint of a chance by, I don’t know…starting up a conversation just once over a span of four years.”

He didn’t actually say the words, but The Prince of Darkness had just called me a giant loser.  And I had been one.  Four years of longing for Cathy, and four years wasted because I had no idea how to approach her, or what to even say to her.

For someone who would grow up to be a writer, I clearly had not yet realized that I had the ability to use words to my advantage.

Or how to say something as inconsequential as, “Hi, Cathy”.

The sad thing was, I hadn’t changed much since fourth grade.  I still have a hell of a problem figuring out how to approach members of the fairer sex, and even when I finally, miraculously manage to get one interested in me, I seem hellbent on scaring her off.

“Maybe I’m better off leaving that first kiss alone,” I finally spoke after playing out the various scenarios in my head.  “With my luck, I’d screw up my romantic future, and find myself sitting here a virgin.”

Satan waited a very long time before speaking.  “I was going to disagree with your virginal version of the present day, but the more I thought about it, the more I realized that you might be right.”

So from now on, I’m going with the story that it’s a damn good thing I never kissed Cathy back in grammar school.

Maybe I need to rethink this whole time machine thing…

2 Responses to First Kisses Are Hell