Caroling May Be Hazardous To Your Health

It’s hard to ignore The Devil when I sense he’s up to no good.  And he was definitely up to something.

Over the past ten minutes, he’d been out to the front porch on six occasions.

When he returned this time, he was tucking a measuring tape into the jacket pocket of his impeccably tailored suit.  After which, he jotted down something on a tiny notepad, that he then slipped inside a pocket in his slacks.

“What exactly are you doing on my porch?” I finally asked.

One has to be careful about putting a guest armed with a mighty pitchfork on the spot, but enough was enough.

“Just something for Christmas,” Lucifer answered a little too quickly.  “Please don’t let my puttering around interrupt your writing.”

I took a sip of my Snapple and studied the being in the expensive suit and Santa hat, who was clearly trying to hide something from me.

“You’ve already put enough lights and decorations out there to make my front porch visible from space,” I quipped.  “What more could you be adding?”

The Prince of Darkness shrugged.  “Just a final touch to make it perfect.”

“But there’s barely enough room for me to move around out there when I need to come and go from the house,” I pressed because I wanted him to tell me what was really going on outside my door.

“Good thing you’re still running then,” Satan replied with with a wink and devilish grin.  “The slimmer you get, the more decorations I can add.”

He studied the front windows and then quickly wrote down some additional notes on the pad he kept in his pocket.

“What are you writing?”  I figured I’d try a different approach and see if the witness would crack or trip up in his own web of lies.

“Just a list of Christmas gift ideas for my favorite blogger,” The Devil volunteered.  “You don’t happen to have any netting, do you?  If you don’t, it’s going on the list because everyone really should have some around the house.”

He looked at me expectantly, and multiple alarms went off in my head.  Finally, I knew what he was up to, and it was even worse than I’d feared.

“You’re building a trap for Christmas carolers!” I shouted accusingly as I sprung up off the couch.  “What have I told you every year around this time?  You can’t kill the Christmas carolers.  I have so few rules, but that one is non-negotiable.”

Lucifer looked at me like I was crazy.  “Trap?  For Christmas carolers?  Me?  Surely, you have me confused with someone else.”

“You have a tell when you’re lying.  You tap your pitchfork against your shoe,” I told him as I pointed to his expensive loafer and the pitchfork that was being tapped against it.

The Prince of Darkness suddenly dropped his frightening weapon like it was burning his flawless skin.  “So that’s why you always beat me at poker!”

“We’ve never played poker,” I countered.  “And stop trying to change the subject.”

I sat back down on the couch and chugged the rest of my Snapple.  Standing up to Satan really left my throat parched.

“Fine.  You got me,” The Devil confessed.  “You know I hate carolers, but in my defense, it was going to be a no kill trap, and I planned to release them in the wild.  And by ‘in the wild’, I mean New Hampshire, or maybe even Vermont.”

He walked over to the couch and sat down in defeat.

I offered him a bottle of Snapple from the cooler, and he accepted it reluctantly.

“You told me last week that you love Christmas,” I reminded him.  “Why do you still have an issue with carolers?  All they’re trying to do is spread some Christmas joy.” 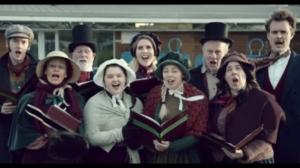 “Most songs in a caroler’s playbook are of the religious variety,” Lucifer explained.   “That’s the part of the holiday I dislike.  If they sang about greed and commercialism, I’d be joining in as a sweet baritone.  But the only song about commercialism they ever sing is ‘The Twelve Days of Christmas’, and I absolutely loathe that one.”

Did anyone actually like that song?  It’s so annoying.  And repetitive.  And overly obsessed with birds.

“Still, you can’t harm any carolers that come onto my porch.”

“Christmas is supposed to be about giving,” The Prince of Darkness grumbled.  “I don’t see why you can’t give me this one little thing.”

“Because Santa Claus would put me on the Naughty List if any harm were to come to carolers at The House on the Hill,” I answered decisively.

“I guess we’re going to have to agree to disagree on the proper way to handle the largest menace of the Christmas season,” Satan shot back at me.

“Sometimes, I think I’m looking at the largest menace of the Christmas season,” I replied as I stared at him and flashed an evil smile. 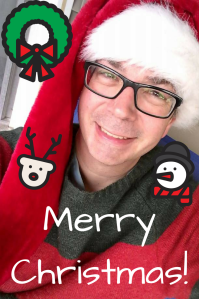 “I’m going to head outside and maybe remove some giant hooks that I might have installed in the porch ceiling,” The Devil announced as he stood up, collected his pitchfork, and headed for the door.

I let out a long sigh of relief.

I’ll admit that I’m not a huge fan of Christmas carolers, either.  Strangers showing up at my door unannounced is unsettling.  Plus, I’m never sure if I’m supposed to give them something to thank them for a service I never requested.  But I’d never do a caroler harm because that’s just wrong, and I know Santa is watching…

Native New Yorker who's fled to the quiet life in Maine. I write movies, root for the Yankees, and shovel lots of snow.
View all posts by Austin →
This entry was posted in Christmas, Humor and tagged Christmas, Christmas Carolers, flash fiction, Humor, Modern Philosopher, sarcasm, satire, short story, Sundays With Satan Short Story Series, The Devil. Bookmark the permalink.

12 Responses to Caroling May Be Hazardous To Your Health