My Ghost of Christmas Past Makes Amends 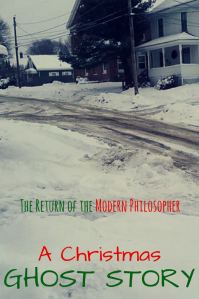 I’m at the age, Modern Philosophers, when I have to wake up a couple of times over the course of the night.

Sometimes, it’s to go to the bathroom.  Other times, it’s because some weird noise echoes hauntingly through The House on the Hill.

And much more often than I like, it’s because I have that recurring nightmare about the scary masked figure standing over my bed and watching me sleep.

Last night, however, it was something complete different.  A Christmas Ghost Story…

I was actually having an awesome dream.  It was Christmas morning, and a beautifully decorated tree surrounded by presents, dominated the living room.

My wife, whose face I couldn’t see, handed me a giant gift from her and the kids.

That’s when I awakened.  I quickly realized I was in bed, it was the middle of the night, and my bed was covered with Christmas presents.

I assumed I was still dreaming because no one ever gets me a gift on Christmas, but after pinching myself way too many time, I realized this was reality.

I picked up the closest box.  The tag said it was for me, from Santa.  I didn’t understand what was happening, but I didn’t care.

I had gifts for Christmas!

I tore it open with unbridled excitement, and it was a package of tube socks.

Bummer, but there were still so many more presents to open.

The next one was underwear.

What in the name of Sweet Baby Jesus was going on here?

“Sorry for all the disappointing gifts,” apologized The Ghost of Christmas Past when he finally emerged from the darkest corner of my bedroom.  “They’re actually why I’m here.”

Of course, I freaked out because I assumed my visitor was the stranger in the mask, who was finally going to kill me in my bed.

Once he explained he was My Ghost of Christmas Past, however, I stopped hyperventilating long enough to collect my thoughts and let out a long sigh.

“I’m going through some personal stuff right now and I’m working a program to try to make things better,” The Ghost explained as he hovered near the foot of the bed.  “One of the steps is making amends, and that’s why I’m here tonight.”

“I know you have some really horrible memories of Christmas, and that’s on me,” he continued.  “What you see on your bed is the modern day equivalent of every pair of socks and underwear you received over the years.  No child, good or bad, should get such a high volume of practical gifts on Christmas.  It goes against the very idea of what the holiday represents.”

Sadly, My Ghost of Christmas Past was right.  Having grown up in a “thrifty household”, I’d unwrapped a disappointing number of Christmas gifts that were really everyday items that I’ve always felt should have been banned from under the tree.

If it wasn’t socks and underwear, then it was uniform clothes for school, deodorant, or winter hats and gloves.

“I should’ve done more to make sure you have merrier memories of Christmas,” My Ghost lamented as he eyed a twelve pack of socks with disgust.  “Childhood Christmas memories are especially important because they set the foundation for how your adult Christmases will be.  And we both know those have been pretty bad, too.”

I just nodded my agreement.  Nothing he had said was wrong, and I didn’t want to pile on at a time when he was trying to sort out some personal issues.

“I thought that everything was set once you met Melissa,” My Ghost of Christmas Past confessed.  “You guys were going to get married and she was really big on Christmas.  There would be American and Irish traditions to celebrate, and eventually, adorable little ones scampering around under the tree.  I just phoned it in from there, so it’s likely my fault that your relationship fell apart before you could spent a Christmas together.”

At this point, I was starting to wish that my surprise middle of the night visitor had been the masked figure with homicidal intent.  At least that would have been quick and painless, unlike this prolonged torture of harrowing Christmas memories.

It was apparent that My Ghost of Christmas Past was depressed and probably needed a hug, but how does one hug a spirit?

I decided to take another path and try to boost his spirits (horrible pun intended) with my words.

“I don’t blame you for the horrible Christmases I’ve endured over the years,” I told him as convincingly as I possibly could while half asleep and not quite believing what I was saying.  “Regardless of how they might look years later, at the time, they were some of the happiest moments of my life.  Christmas isn’t all about the presents.  It’s also about the excitement, the bright lights, the carols, the Christmas specials, the food, and seeing everyone around me in such a good mood.”

“You did your best, but a lot of it is on me, too,” I decided that in the spirit of giving, I’d point the blame at myself.  “I could have done a better job of making my Christmases merry and bright.  I didn’t have to mope around in a house devoid of decorations, feeling sorry for myself because I spend every December 25th alone.”

That seemed to work.  The aura surrounding My Ghost of Christmas Past began to glow far brighter, and he stepped around to the side of the bed to allow me a better look.

“Thank you for your kind words, Austin,” The Ghost cooed as he jangled his chains excitedly.  “Can I put you down for having accepting my apology?”

“You have made amends,” I assured him as I let out a yawn.  It was still the middle of the night after all, and it had been a long week.

“Let me gather up all these socks and underwear, and get out of your hair,” he offered.

I put up a hand to stop him.  “Why don’t you just leave them?  I could always use more.”

“What about My Ghost of Christmas Present?” I asked as I stifled another yawn.  “Can I expect a visit from him next?  I’ve definitely got a few things I’d like to discuss.”

“Your Ghost of Christmas Present is much too afraid to face you,” My Ghost of Christmas Past broke the bad news.  “It’s going to be another crappy Christmas, and he’s too much of a wimp to deal with your frustration, so he’s just going to hide out and allow this Christmas to become my problem next year.”

“Oh well.  Merry Christmas,” I wished him with a sigh as I settled back under the covers.

My Ghost of Christmas Past smiled and slowly faded from view until I was alone again.  Then I fell soundly asleep as visions of boxers and tube socks danced in my head…

Native New Yorker who's fled to the quiet life in Maine. I write movies, root for the Yankees, and shovel lots of snow.
View all posts by Austin →
This entry was posted in Christmas, Humor and tagged A Christmas Carol, Christmas, flash fiction, Ghost of Christmas Past, ghost story, Humor, Modern Philosopher, sarcasm, satire, short story. Bookmark the permalink.

12 Responses to My Ghost of Christmas Past Makes Amends