It was ten degrees below zero when I woke up this morning, Modern Philosophers, and twenty-three below with the windchill.

I don’t care how dedicated I am to my fitness program, there is no way that I’m going out to run in that weather.

However, I wasn’t about to just give up on exercising today.  No, steps still had to be collected, sweat had to be generated, and Fat Austin had to be kept buried deep down where he had no chance of ever again showing his chubby face.

Knowing that there was going to be a Severe Windchill Advisory in effect this morning, I came up with an alternate workout plan.

After all, I have a horrible history of slacking off and putting on the pounds once Snow Miser takes control of the weather.  I had to make sure I didn’t slip back into my old, lazy, high caloric habits.

So I still woke up early and changed into my running clothes.  However, instead of putting on my sexy safety vest and venturing out into the dark Maine morning, I went to the warm, cozy living room.

I then did laps of the first floor and climbed stairs until I had gone three miles.  Sure, it wasn’t the same as running, but I worked up a good sweat and collected 7,000 steps.

Never once did I have to worry about losing a digit to frostbite, dodge traffic, or watch out for icy patches of road.

It’s not a workout I would do on a regular basis, but it was exactly what I needed this morning when it was impossible to do my usual run.

Of course, a big part of my daily fitness routine is keeping active and collecting steps all day long.  I always go for a walk during lunch, as well as on my two breaks over the course of the workday. 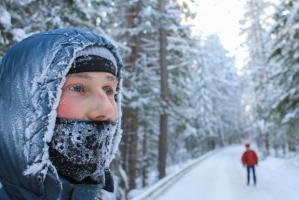 That’s about 6,000 steps there, and I didn’t want to lose out on those simply because it was going to be below zero all day.

I remembered that there was an empty office on the other side of the building.  In my mind, it was bigger than it actually ended up being, but it was a perfect spot to walk and not bother my coworkers.

In fact, when my little group of dedicated walkers showed up on our morning break, another coworker was already walking laps in the office.

Again, walking in the empty office wasn’t the perfect workout, but it was a much better option than sitting out my breaks because it was far too cold to go outside.

Sometimes, you just have to work with what you’ve got, rather than take the easy way out.

After dinner, it was three degrees below zero, so I once again resorted to walking laps around the ground floor.  I’m about to break 20,000 steps for the day, so it looks like my back up plan for the Ice Age was a success. 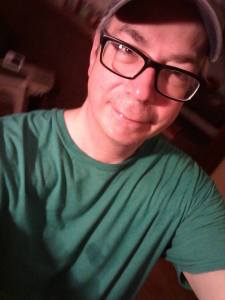 This cold spell is supposed to stay with us through next week, but I know I can still do my workout even if the idea of stepping outside of The House on the Hill is too intimidating.

At least over the weekend, I can wait around for the temperatures to rise before heading out for a run.  I just don’t have that option on a workday.

I suppose I could drive over to the gym and run on a treadmill, but I’m a little partial to my indoor workout.  Plus, I don’t really want to be around a bunch of sweaty strangers that early in the morning.

The point is, you shouldn’t let the cold, snowy weather derail your fitness plans.  Get creative.  Think outside the box.  Don’t be a winter workout wimp!

How do you guys stay active when the weather outside is frightful?

Native New Yorker who's fled to the quiet life in Maine. I write movies, root for the Yankees, and shovel lots of snow.
View all posts by Austin →
This entry was posted in Fitness, Humor and tagged exercise, Fitness, health, Humor, Maine, Modern Philosopher, running, sarcasm, satire, winter. Bookmark the permalink.

11 Responses to The Great Indoors