The Scary Kind of Whiteout

Just because I have a new car that handles amazingly well in the snow, doesn’t mean I still don’t have some perilous journeys, Modern Philosophers.

Today, Winter Storm Grayson has been wreaking havoc on my neck of the woods, with wind gusts over 50 mph and up to eighteen inches of snow expected.

Because I have the RAV4, I have not suffered from the usual anxiety and paralyzing fear of having to drive in a blizzard.  My Post Traumatic Snow Disorder has been under control, but today’s storm definitely put my newfound zen status to the test.

The weather people have been trying to whip us into a frenzy with their apocalyptic forecasts and threats of power outages, but I did my best to remain calm.

I went grocery shopping last night so that there would be plenty of supplies on hand should I be snowed in at The House on the Hill.  I even picked up a new, high powered flashlight in the event we lost power.

I also stopped for gas on the way home from the supermarket so that I’d have a full tank should any emergencies come up while Grayson was in town.

This morning, I hung out of a couple of second story windows clearing snow off the roof to make room for the fresh stuff scheduled to arrive today.

We finally got notice that the office was closing at 1:00.  This was a relief because the commute would take place before dark, and the sooner I could get home, the less likely the chance I’d be driving in the really heavy snow on roads that weren’t plowed.

I was confident in my car’s ability to get me home safely, but the more it snowed, the greater the chance that there would be more obstacles to overcome on the drive.

What I was not expecting was having to be the pace car on the highway.  There was a car in front of me when I started, but it got off at the first exit.

So I was in the lead.  Setting the pace for the peloton that followed me single file on the only lane that was plowed, and even that wasn’t cleared very well.

I like to have a lead car so I can follow its taillights to ensure I stay on the road in a storm.  With no lights to guide me, I was on my own.

Plus, it was pretty much whiteout conditions.  I could see just a few feet ahead of me, and the only color was the occasional glimpse of blacktop where the strong winds blew clear the road in front of me.

I had the wipers on high, and the defrost on full blast.

I wasn’t afraid that the car couldn’t handle the conditions.  I simply was not a fan of being unable to see anything.

I didn’t pick up a lead car until I was off the highway and turned onto the road in town.

I’d made it without incident, but I’m sure my blood pressure spiked and I might have had a few fleeting thoughts about why I had moved away from Southern California.

Once I got the car safely in the garage, I thanked it for its service, put a warm blanket over its hood, and then scraped all the ice off its windows.

I then shoveled for 45 minutes, and by the time I was done, the driveway was covered in snow again.  But with a foot and a half expected, and my neighbor’s snowblower out of commission, I figured the smart strategy was to shovel every couple of hours, rather than try to dig out from under eighteen inches.

Here’s how I looked when I was done…

I think there’s a little bit of terror in those eyes, along with exhaustion, frustration, and wonder.  At least I was home and could hide from the snow if need be.

Two hours later, I was back outside with my shovel.  Grayson had been a very naughty boy in such a short period of time.

So much snow.  And it was only four o’clock.  The forecast is for it to snow until the wee hours of the morning.  I got back to work.  Here’s how it looked before I started… 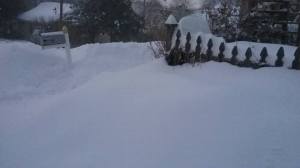 I got the driveway about half done when Mark came out to say hi.  That’s when he told me the most amazing news.

I think I might have teared up a little.  Moments later, I heard the angelic roar of the machine’s motor and realized that I wouldn’t have to come out all night to shovel.

Mark even assured me that he would be up at 4:30am to clear his driveway so Brenda could go to work, and he’d take care of mine as well. 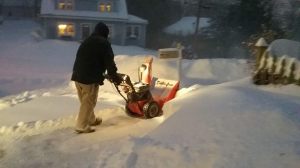 They are predicting more whiteout conditions tonight and the winds are supposed to intensify.  Since I don’t have to drive in it, or go out to shovel, I’m going to do my best to not look out the window.

It’s much better for my Post Traumatic Snow Disorder if I avoid any triggers.  I think watching TV and enjoying a piece of chocolate cake is exactly what the doctor ordered.

I’m so grateful for my wonderful neighbors, and relieved that I was able to drive in the whiteout without my usual anxiety and paralyzing fear.

Native New Yorker who's fled to the quiet life in Maine. I write movies, root for the Yankees, and shovel lots of snow.
View all posts by Austin →
This entry was posted in Humor and tagged dealing with anxiety, driving in a blizzard, Humor, Maine, Modern Philosopher, Post Traumatic Snow Disorder, sarcasm, satire, surviving a blizzard, Winter Storm Grayson. Bookmark the permalink.

11 Responses to The Scary Kind of Whiteout