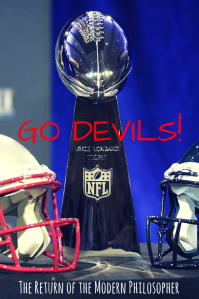 Surviving Super Bowl Sunday can be a chore when you are a New York Jets fan.

The Jets have not appeared in the big game during my lifetime, and according to team sources, they have no intention of making it to the Super Bowl any time soon.

There are several ways to approach Super Bowl Sunday as a Jets fan.  The easiest being to root enthusiastically against the hated New England Patriots.  Odds are, the Pats will be playing in the big game, and as luck would have it, that is the case this year with Super Bowl 52.

Another great option is to just prepare a ton of great Super Bowl snacks and enjoy all the cool commercials between the action of a game that means absolutely nothing to you.

I chose to go with that last option, which was easy given that my usual Sunday guest had arrived with several platters of his award winning Hell Fire Chicken Wings.

“So I take it you are rooting for the Eagles since you hate the Patriots because you are a New Yorker who loathes any team from Boston,” The Devil asked with a chuckle.

I took a long sip of my Snapple and shrugged.

“I’m really not sure what I’m doing,” I admitted.  “True, it is in my nature to despise all sports teams from Boston, and Boston in general, but I’ve never liked Philly, either.  Both cities piss me off, so I’d rather both teams lost.”

Lucifer, who was well dressed in an impeccably tailored suit with a pin of the Vince Lombardi Trophy on the lapel, flashed a handsome smile.

“I’m running into the same problem” he admitted as he put a few more wings onto his plate, and then carefully wiped his fingers on a napkin so as not to get any Hell Fire sauce on a suit that cost more than my mortgage payment.  “I have numerous people offering their eternal souls in exchange for a Super Bowl victory, but I’d rather not have Hell overrun with Beantown Boneheads or Philly Fanatics.”

I had to raise an eyebrow to The Prince of Darkness’ catty answer.  It was so out of character for him as he always seemed Hell bent (pun intended) on increasing the census numbers of his kingdom.

“I thought it was all about securing souls for you,” I stated as I reached for more wings.

“Not exactly,” Satan countered.  “It’s supposed to be Hell for the Damned, who are trapped for all eternity to pay for their sins.  If I fill the place with knuckleheads from Boston and Philadelphia, it becomes Hell for me.  Which, in turn, means more time spent at The House on the Hill to get away from it all.”

I froze mid-bite on a delicious Hell Fire wing.  Did he really just say he would be spending more time at my house?

One day a week is more than enough.  The House on the Hill is my sanctuary from the nightmares this world insists on hurling at me.  I was not going to allow it to be turned into Hell on Earth.

“Then you need to turn down all offers related to the Super Bowl, and have absolutely nothing to do with the outcome of the game,” I insisted.  “If you don’t, Hell is either going to become the new South Philly or South Boston.  This is a no brainer.”

Lucifer fiddled with the chicken wings on his plate while he pondered my suggestion.

“Then who do we root for?” he finally asked.

“We make fun of both teams, accuse the refs of fixing the game so the Patriots win, and enjoy the commercials.  It’s really all just an extended lead up to a long awaited episode of This is Us,” I explained.

“I love that show!” The Prince of Darkness beamed.  “We never get to watch it together, though, because it’s usually on Tuesday night.”

“Today’s our lucky day then,” I informed him.  “It truly is a Super Sunday.”

Native New Yorker who's fled to the quiet life in Maine. I write movies, root for the Yankees, and shovel lots of snow.
View all posts by Austin →
This entry was posted in Humor and tagged Humor, Modern Philosopher, New England Patriots, Philadelphia Eagles, sarcasm, satire, short story, Sundays With Satan Short Story Series, Super Bowl, The Devil, This Is Us. Bookmark the permalink.