Investing In The Oscars

The Devil appeared at my front door in an impeccably tailored tuxedo.  He looked like he’d just stepped off the cover of a fashion magazine.

Meanwhile, I was schlepping around in ratty sweatpants, my Nite Show fleece, and a Yankees cap.

In other words, it was a typical Sunday at The House on the Hill.

“Happy Oscars Sunday!” Lucifer declared as he entered my home followed by two of the ugliest, foulest smelling Demons I had ever encountered.

The Demons deposited two enormous platters of chicken wings on the living room table, and then mercifully vanished with a snap of their master’s fingers.

“I take it those are your world famous Hellfire Wings?” I asked as I wandered over to let the delicious odor waft into my nose.

“And the Oscar goes to Austin!” The Prince of Darkness chuckled as he strutted into the room as if he were making his way down a runway.  “How come you’re not excited for the big day?  You used to love the Academy Awards.”

I shrugged and grabbed two bottles of Snapple from the cooler.  I handed one to my guest and then took my usual spot on the couch.

“I guess with every passing year that I don’t win an Oscar, my interest in the ceremony wanes,” I admitted.  “I still hope to win one of those gold statues some day, but at the moment, the odds don’t seem to be forever in my favor.” 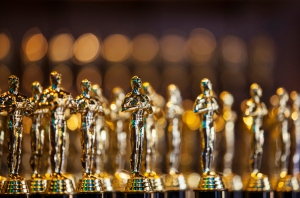 Satan flashed a million dollar smile before taking a sip of his Snapple.

“Bonus points for the movie reference,” he informed me as he sat down on his end of the couch.  “I believe in you, and implore you to never give up on your dream.”

“Thanks,” I replied with a shy smile.

He was one hundred percent right, of course.  I used to wake up like a kid on Christmas morning every Academy Awards Sunday, but that excitement had vanished recently.

Last year, I didn’t even bother to stay up for the end of the ceremony, and I missed the big screw up over the announcement of the Best Picture winner.

“Why are you so into the Academy Awards?” I questioned as I eyed the wings hungrily.

“I see it as an opportunity to check on my investments,” The Devil revealed with a wink and a trademark devilish smile.  “That auditorium is packed with people who are destined to spend eternity under my watchful eye.”

“Are you saying everyone at the Oscars tonight made a deal with you to get nominated?” I asked.  “I hope they were at least smart enough to hold out for a victory, rather than just a mere nomination, before they traded you their immortal souls.”

“You realize they all have agents because they are totally clueless as to how to negotiate a decent deal, right?” Lucifer replied.  “Fortunately for me, however, most of my future guests traded away their souls to me long ago simply to get a first role, or to have a huge opening weekend.”

“The others with reservations in Hell are coming to me after they die because of reprehensible behavior that has only recently come to light in the press, but has always been on my radar.  Cheers to Hollywood!”

He raised his bottle of iced tea, and I felt compelled to tap it in a toast.  Not because I was celebrating criminal behavior, but because I love the idea of just desserts.

“But not everyone at the Oscars is going to Hell, right?”  There had to be some hope on that issue because I still wanted to be nominated eventually, but didn’t want an automatic trip to Hell as part of the deal.

“No, there are still some people who made it in Hollywood without cutting a deal with yours truly, or by committing an outrageous number of unforgivable offenses,” The Prince of Darkness assured me.  “It’s most independent filmmakers and the behind the scenes types, though.”

“That makes sense,” I mumbled as I didn’t really find much comfort in his words.

“Don’t worry, your beloved Daisy Ridley is not on my list, if that’s what’s got your toga in such a twist,” Satan ribbed from his end of the couch.  “There’s still a chance you can one day have a lightsaber duel in Heaven with your Hollywood crush.”

My face lit up in an enormous smile.  Now I was in a mood to watch the Oscars.

“We don’t have to wait for the show to begin to start eating these, do we?” I asked with a hunger in my eyes that made it obvious what the answer to my question should be.

“Of course not,” The Devil agreed.  “Why do you think I brought two platters?”

Native New Yorker who's fled to the quiet life in Maine. I write movies, root for the Yankees, and shovel lots of snow.
View all posts by Austin →
This entry was posted in Humor and tagged Academy Awards, Deal with the Devil, Humor, Modern Philosopher, sarcasm, satire, sellling your soul, short story, Sundays With Satan Short Story Series, The Devil, The Oscars. Bookmark the permalink.

7 Responses to Investing In The Oscars