“Happy Easter!” The Devil declared excitedly as he entered the living room carrying the largest Easter basket I had ever seen.

After he’d placed the behemoth gift on the table, I was finally able to catch a glimpse of my guest.  As always he was dressed to the nines in an impeccably tailored suit.  This one had a colorful Easter egg pin on the lapel.

“Didn’t they have anything bigger?” I asked because I am an ungrateful and obnoxious wise ass.

“Unfortunately, this was the best I could do on such short notice,” Lucifer explained apologetically.  “Apparently, Christians are really going all in on Easter this year.  My guess is it’s to compensate for the guilt they feel for having supported Trump.”

We both got a good laugh out of that one, and I fished two bottles of Snapple out of the cooler as he sat down on his end of the couch.

After passing him his bottle, I took a moment to examine my gift.

“This really is awesome.  Thank you.  It’s like there’s an entire candy store inside this cellophane force field,” I observed as I poked at the purple material that seemed to be the only thing preventing a tower of candy from toppling over onto my lap.

“I wanted to get you the one that came with Oompa Loompas to serve you the candy, but they were entirely sold out,” The Prince of Darkness fibbed with a chuckle.

“You didn’t have to do this,” I told him.  “But I’m not going to turn away all this chocolate.  This should hold me over for a few months.”

“I know there’s no one special in your life to get you a basket,” Satan explained.  “Also, I have some big news and the basket is celebratory in nature.”

That got my attention.  When The Devil has news, it tends to be apocalyptic, so it’s really important to listen and get all the details.

“What’s up?” I asked all eager beaver to absorb some knowledge.

“I had a chat with The Big Guy last night,” Lucifer explained in a slow, steady tone as if trying to force himself not to just blurt out whatever was on his mind.  “We finally buried the hatchet.  He’s forgiven me for all I’ve done, and I’m giving up my rule of Hell in order to take a high profile position in Heaven.  It’s an Easter miracle!”

I sat in stunned silence, and then took a long sip of my Snapple as I absorbed and processed the information that had just been given to me.

“No way,” I finally decided.  “I’m sure everyone in Heaven is in a great mood because it’s Easter, but there is no way in Hell, witty wordplay totally intended, that God would ever forgive you and allow you back behind the Pearly Gates.  Plus, you’d never give up your eternal kingdom of pain and suffering for any reason.  I call bullshit.”

“April Fools!” The Prince of Darkness yelled as a devilish smile danced across his handsome face.  “I didn’t think I could get out that yarn without cracking, so I’m very proud of myself.”

“Dude, you are the master of deceit and manipulation,” I reminded my guest, who seemed to be suffering from temporary amnesia.  “Lying like that is totally your thing.”

He waved off my words like they were a glowing compliment.

“I wasn’t lying, though, when I sat the basket was celebratory,” Satan deflected the attention away from his twisting of the truth.  “Let’s talk about that exciting phone call you got from Hollywood yesterday.  Have you told your followers the big news?”

That earned him a heavy sigh.  As excited as I was by yesterday’s phone call, and what it could mean for my screenwriting career, I knew to always temper my expectations when it came to Hollywood. 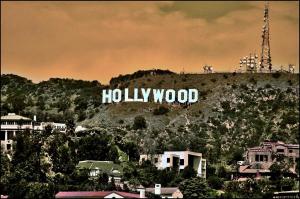 After all, that town had crushed almost as many souls as the being on the other end of my couch had stolen.  And they both used trickery and deceit to do it.

“I think I might hold on to that bit of news just a little longer,” I finally decided.  “Don’t want to raise expectations for no reason.”

The Devil shook his head in understanding.  “I get it.  That call on Easter weekend most likely gave you faith in Hollywood, and this is one of those holidays that reminds you of how much your faith has faltered since the Nuns lost their grip on you.”

“Something like that,” I mumbled.  Deep down inside, however, I was praying that this Easter miracle was the real deal…