Not All Fireworks Are Explosive

“I hear you had one Hell of an Independence Day!” The Devil declared as he strode confidently into my living room like he owned the place.

As always, he was well dressed in an impeccably tailored suit, which made me look like a homeless person in my well worn shorts and ratty tee shirt.

“What do you mean?” I asked with the same oblivious energy I usually reserved for his wild, confusion entrances.  “It was too hot, so I stayed inside and watched the game.”

“Word around the rings of Hell is that you had much more to celebrate than America’s independence from the stuffy Brits,” Lucifer added, supplying more information, but doing absolutely nothing to clarify his original statement.

“You’re confusing me, dude,” I admitted and took a long sip of Snapple.

Sometimes, it was just easier to tell him I had no idea what he was talking about, rather than trying to play Name That Vague Train of Thought all afternoon.

The Prince of Darkness stared down at me like I had three heads.  Had I three heads, I can assure you they would all be throbbing with migraines from his annoying presence.

“Didn’t you have a really spectacular Tuesday?” he asked.  “Matthias loved your screenplay, and you finally bought an air conditioner.  You must have been celebrating all day Wednesday!”

It was adorable that he was so excited and thought I’d had a rager to celebrate.

“Oh, yeah,” I nodded once I understood down which track his train of thought was headed.  “I was pretty pumped about the screenplay.  For once, I felt like my writing career was headed in the right direction.  I didn’t have a wild party, but I was excited.”

“You’ve got to get a little crazy about these achievements, Austin,” Satan advised as he sat down on his end of the couch.  “Writers don’t get the recognition they deserve, so sometimes, you’ve got to celebrate yourself.  You kicked ass and earned the right to feel good about what you accomplished.”

“I will keep that in mind the next time I hit a writing milestone,” I promised and then crossed my heart with my index finger to prove I was serious.

“And buying the air conditioner was almost as giant a step as leasing the RAV,” The Devil informed me.  “Taking care of yourself is important.  I don’t see anyone else coming around here to look after you.  It’s about time you spend a little money on Austin.” 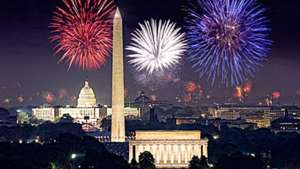 “You were doing so well with your pep talk until you pointed out that nobody loved me,” I whined in that little annoying voice that keeps people from loving me.

I reached for another bottle of Snapple, but my guest slapped away my hand and grabbed the cooler.

“Snapple is for winners, not for whiny babies,” Lucifer announced with just a little bit of Hellfire in his eyes to really get my attention.  “I didn’t say no one loved you.  I stated that no one was here taking care of you.  Big difference.  Do you understand?”

“Sure,” I nodded.  “Thinking the one thing cost me my Snapple.”

The Prince of Darkness was not amused.  He dragged the cooler over to the other side of the couch, close to where he kept his pitchfork.

“You had a great week.  Revel in it.  Don’t take away from it by feeling sorry for yourself.  Save the self pity for some brooding character in your next screenplay.  Maybe you should go sit in the air conditioned atmosphere of your bedroom for a few hours, and remember how good it feels to put yourself first.”

That was actually some pretty decent advice, and if I went up to bask in the chilled aura of my new purchase, it would save me from his constant pestering.

But I couldn’t do that to the guy.  He came all the way from Hell to the one place on the planet that was actually a little warmer, just to spend time with me and boost my morale.

“Thanks for the advice,” I said sincerely.  “I will make a better effort to stay positive and look out for myself.  I really did kick ass on that screenplay.”

A devilish grin quickly grew across Satan’s face, and he returned the cooler of Snapple to its rightful position between us.

“I’m glad you’ve taken my words to heart,” he crowed as the grin exploded into a beaming smile.  “This makes me something akin to your Yoda, doesn’t it?”

I grabbed a Snapple from the cooler, and just have him a look.

He raised his Snapple bottle in toast.  I tapped his bottle with mine, and then chugged down half its contents because I was a bad ass writer, and bad ass writers make their own rules and drink at their own pace.

At least that was what Lucifer had led me to believe…

Native New Yorker who's fled to the quiet life in Maine. I write movies, root for the Yankees, and shovel lots of snow.
View all posts by Austin →
This entry was posted in Humor, Writing and tagged fireworks, Fourth of July, Humor, Independence Day, Modern Philosopher, sarcasm, satire, screenwriting, short story, Sundays With Satan Short Story Series, The Devil. Bookmark the permalink.

2 Responses to Not All Fireworks Are Explosive