The Devil put down the Sunday paper, straightened his tie, and cleared his throat.

As always, he was well dressed in an impeccably tailored suit.

At the moment, he also wore an extremely serious expression on his handsome face.

“There’s something I’d like to say, if I could have your attention,” he requested somberly.

If by having my full attention, he meant my putting down my bottle of Snapple and looking at him, I granted his request.

“I want to make it clear that there was absolutely no collusion between the Trump campaign and Hell regarding the 2016 Presidential Election,” Lucifer informed me.

“I didn’t realize people thought there was,” I replied with a shrug, and then reached for my Snapple so I could take a long, refreshing sip.

“Oh, people think it,” The Prince of Darkness informed me.  “Robert Mueller keeps trying to subpoena me, and to be honest, I’m surprised he doesn’t have agents staking out your house to try to grab me during my weekly visit.”

“How come it hasn’t come out in the press?” I wondered aloud.

“Mueller is trying to keep it quiet to spring it as a surprise,” Satan explained impatiently as if this should all be common knowledge.  “He doesn’t want Trump to hear about it and try to label it as Fake News like he does with everything else negative about him.” 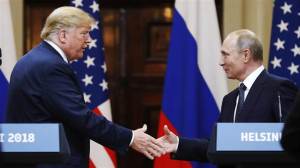 “But I thought all the collusion was allegedly with the Russians,” I pushed like a confused child trying to learn the rules of a complicated game.  “Who’s saying your were involved?  Why would you be involved?”

The Devil sighed in frustration and fished a Snapple out of the cooler.

“No one believes that Trump won the election fairly,” he stated.  “Some people think that it was the Russians who interfered with the results and put Trump in the White House.  Others are sure the only way Trump could have won is by making a deal with me.”

Now it was beginning to make sense.

“But why would you ever make a deal with Donald Trump?” I finally asked the right question.  “It’s pretty obvious that his soul is going straight to your eternal care once he is no longer among the living.”

“Exactly!” Lucifer shouted as he rose up off the couch.  “There was no deal with me because I have no need to trade for his soul.  But you know how close-minded people can be, especially when it comes to Donald Trump.”

I shook my head in agreement.

“Have you tried explaining this to Robert Mueller?” I asked.

“I’ve had my lawyers tell him numerous times,” The Prince of Darkness growled as he returned to his seat.  “He insists on deposing me and hearing it from my own mouth.  There is no way I’m allowing anyone to question me under oath.”

“Plus the Bible would probably burst into flames when you placed your hand on it,” I added with a chuckle.

Satan did not crack a smile.

“This whole collusion confusion is costing me business,” he complained.  “No one wants to make a deal with me because they blame me for Trump’s being President.  I’m being punished for something that is not my fault!  Hell did not collude with Trump!”

“Hopefully, Mueller’s investigation will clear your name and finally let the world know the truth about what happened,” I said in a calming voice because I really didn’t want The Devil losing his cool in my living room.

“I’m willing to take the blame for all the evil I’ve done, but I refuse to take the rap for inflicting President Trump upon the world,” Lucifer explained.  “I’m bad, but I’m not a total monster…”

4 Responses to No Collusion