I’ve always been good with numbers, units of measurement, and conversions, Modern Philosophers.  That’s why I’m so proud to announce that I’ve come up with a new unit and conversion.

I’m calling it the Monkey Boy Metric, in honor or my enormous Monkey Boy feet.

In this unit of measure, one foot is equal to two tons of anguish.

I have gigantic feet, which require size fifteen shoes to keep them contained and out of the view of the public (which is where all feet belong if you ask me!).

I hate feet, and believe that they are the grossest part of the body.  I have accepted that feet are necessary to keep me upright, and to help me move along, but that doesn’t mean I have to like them, or ever want to see yours.

Some people require that guests remove their shoes upon entering their homes.  I, on the other hand, make guests put on a second pair of shoes to ensure there isn’t a freak wardrobe malfunction that would lead to my seeing anyone’s feet.

I’m getting totally off topic here, while simultaneously grossing myself out.  Time to reel this in and regain my focus.

As much as I dislike feet, I never expected that part of my body to turn on me.  My guess would have been my spleen or appendix.  Possibly a hamstring.

But betray me they did.  I haven’t been able to run for the past four days.  Hell, I’ve barely been able to walk.

All because I’m in so much pain.

Based on the above pain scale, I’d say I’ve been redder than a Maine lobster, which is probably a Spinal Tap-esque 11.

I went for my usual run on Tuesday, but when I woke up on Wednesday, a pain so severe shot through my right foot that I immediately Googled “How to amputate your right foot”.

I quickly did a second search of “How to amputate your right foot without having to look at it because feet are gross”.

Luckily, I’m not one to be impulsive.  Plus, I did not have a guillotine handy.

Seeing as how I am King Klutz, I assumed I did something in my sleep to injure myself.

After all, I do have some pretty vivid dreams and nightmares, so for all I knew, I could’ve  run a few miles in my sleep, or sprinted around the house to avoid the frightening creature chasing me in my mind.

I am surrounded by medical professionals and runners, though, so they were able to come up with a more logical explanation for my excruciating pain.

The general consensus was that I caught that annoying plantar faciitis bug that has been going around lately.  Runners are far more likely catch it than couch potatoes, so for once, being active was not better for my health.

Of course, I had millions of troubling thoughts about this diagnosis.  First off, I was under the impression that only fascists could become infected with this malady.  Now I know the ailment doesn’t discriminate according to political leanings.

I also needed to know if there was any way to treat it, or if I had to live with the pain until my foot eventually turned purple, withered up, and then fell off.  The one thing I had going for me in this scenario was that it would most likely take years for such an enormous foot to wither away.

In addition, I was concerned that my always lofty step count was going to drop so precipitously on my fitness app that it might scream past zero and end up in the negative end of the number line.

All very justified thoughts at a time in my life when I couldn’t really think straight because the only thoughts bouncing around my head were related to how the pain in my foot could possibly be getting any worse. 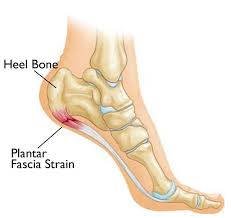 To my great relief, plantar faciitis is rarely fatal, and never leads to a foot falling off.

There are also many ways to treat it without having to deal with my anxiety of going to the doctor.

Or is it a bottle of frozen water?  Or a bottle of ice?  Like I said earlier, I’m not really thinking clearly because of the pain.

I’ve also been standing on an ice pack, doing some stretches, and avoiding all running unless I’m being chased by something moving much faster than I.

The not running part has been a real drag.  It’s not my favorite activity, but it has become a part of my daily routine.  And I have to admit, the falling step count is a bummer.

My foot does feel much better today, but there is still pain, so no running.  I actually even drove to the library today, rather than walking, just so that I wouldn’t make things worse.

Plus, I’m tired of hobbling around like some sinister henchman from a 1940s Film Noir, and I didn’t want to start associating books and reading with pain and anguish.

So the plan for the weekend is to roll more baseballs and water bottles, step on some ice packs, and avoid running.  Hopefully, I will be able to get back to my usual running routine next week and accumulate steps again like a man with a wellness plan (obsession).

I don’t know what’s worse: being in pain, or being inactive.  They both suck pretty badly, but I guess I could have bigger problems, right?

Right now, the pain is tolerable, and I guess this gives me an excuse to be lazy and sit around watching sports on TV all weekend…

Do you have any treatment suggestions for this foot issue that is making me miserable, and preventing me from releasing copious amounts of sweat into the local environment?

13 Responses to One Foot Equals Two Tons Of Anguish