They smiled politely at the waitress, and waited for her to walk away after delivering their drinks, before they dove head first into the awkward conversation associated with a first date.

“Abby tells me you’re a writer,” Maggie broke the ice before sipping her martini.

“Well, I’m sure that was a better enticement to get you to agree to this set up, than telling you that I work a boring office job, and then write during my free time,” Justin quipped as he fiddled with the label on his bottle of beer.

“If you write, you’re a writer, right?” she returned with a shy smile.

Justin shrugged and gulped down some of his beer.  “Abby’s file on you lists you as a third grade teacher.  That must come in handy in dealing with blind dates.”

Maggie wasn’t quite sure how to respond, so she took a longer sip of her drink.

“Look, I know a first date, especially when it’s a blind date, can have its awkward moments,” Justin stated like someone with firsthand knowledge of the situation.  “So I always have a prepared question meant to spark up a conversation, while also serving as an excellent means of weeding out bad matches.  Are you ready?”

Maggie raised an eyebrow, but shook her head emphatically.  She had agreed to the date, knew what she was getting herself into, so she might as well go for it. 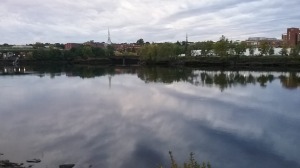 A slight smile skipped across Justin’s lips before quickly vanishing.  “If the technology existed, would you allow your ability to dream to be cut off entirely to avoid ever having another nightmare?”

“Abby warned me about this,” Maggie shared with a smile.  “She said you considered yourself to be something of a modern day philosopher, and liked to throw people off balance with your deep thoughts.”

Justin did not smile.  He just continued to peel away at the label on his beer.  “Abby did not warn me that you’d try to buy time to formulate an answer by rambling on in an almost incoherent manner.”

Maggie contemplated chugging he rest of her drink before answering his question, but she thought the better of it.  She was going to need a clear head to get through this date.

“You’re assuming that I suffer from nightmares…” she began.

“Are you telling me you don’t?” he countered.

“I have nightmares,” she conceded.  “However, they aren’t so horrible that I’d be willing to forever lose my ability to dream just to ensure I’d never be haunted by another.”

“But that’s like saying that just because you don’t have cancer now, you wouldn’t want a medicine that would stamp out any chance of your ever getting cancer,” Justin snapped at her like an uptight teacher looking to embarrass the smartest student in class.

Maggie gave him a look like he was off his rocker.  “Am I, though?” she asked with a disapproving shake of her head.  “How did I just equate nightmares to cancer?  Or were you the one who made the ridiculous comparison?”

Justin chuckled and sipped his beer.  “Abby did say you were feisty, and assured me that you wouldn’t be intimidated by my crazy questions.”

“Don’t try to wiggle out of this one with a compliment, mister,” she stated as she locked eyes with him.  “Where do you stand on the dream slayer scenario?”

“I’d be first in line to turn off the midnight movies of my mind,” he answered without hesitation.  “There are recurring nightmares that play far too often, and feed my insomnia to the point that I spend some days in a semi-catatonic state from lack of sleep.”

He washed down that confession with the rest of his beer. 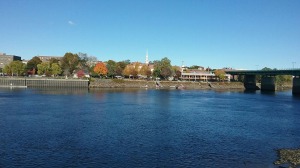 “But wouldn’t your inner writer want to use those nightmares as fodder for your stories?” she pressed.

“Oh, I tried letting the creatures crawling around the darkest corners of my mind to play my Muse, but after a while, I realized that writing about my nightmares only led to more of the same nightmares.  It became a vicious cycle, with the end restless always being a level of exhaustion so debilitating that no writing could be done.”

Maggie ran her finger along the rim of her glass as she pondered Justin’s reply.

Justin raised an eyebrow and smiled.  Clearly, this was an unexpected surprise.

Maggie leaned forward. “If the technology exists to turn off the ability to dream, wouldn’t it stand to reason that this same technology would be sophisticated enough to prevent one from having nightmares, while still allowing the “good dreams” to continue unabated?”

Justin slowly nodded as he gave this one some thought.  “How about we order some appetizers while we consider the possibilities, and the ramifications, of your proposal?”

“Definitely,” Maggie answered and reached for the menu.

They both smiled and thought to themselves, “Damn, Abby is a great matchmaker!”

7 Responses to The Dream Slayer Scenario