One of my favorite things about blogging, Modern Philosophers, is interacting with you.  I love when you comment on my posts, and we get to have a little conversation.

There’s nothing quite like instant feedback to my writing.

What I enjoy even more, though, is when a fellow writer tells me how much she likes one of my posts, and both inspires and encourages me to turn it into something bigger.

That very thing happened this week.  A writer friend, whose feedback and support I truly value, sent me a message about how much she enjoyed The Halloween Party, this year’s Halloween short story.

We got into a conversation about how she’d like to see what happened to these characters, which sparked a memory of an idea I’ve long had for a novel.  We chatted back and forth for a while, she sent me some links for sites looking for short stories, and I updated her on the progress of the TV series I’ve written about my time in college.

Needless to say, once we said goodnight, I was totally hopped up on inspiration.  Not only was my head swimming with ideas to turn The Halloween Party into a novel, but I also fired off an email to my producer to brainstorm some ideas about the TV series. 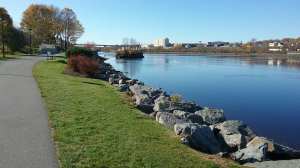 Of course, it’s one thing to have ideas, and something completely different to actually act on them.

For the last couple of days, I’ve been plotting out story ideas.  Like I mentioned earlier, I’ve long had an idea for a novel, and these characters would fit into that concept nicely.

This big turning point was during this morning’s run.  Saturday’s run is always my longest of the week, and I tend to get major mental outlining done when I run.  So this morning, I set off to put in some miles and piece together my snippets of story ideas.

Characters’ names are very important to me.  Since The Halloween Party was intended to only be 1,000 words on my blog, I didn’t put much thought into the male lead’s name.  I just wanted something fancy, so I landed on Sebastian.  I’ll admit, it was probably inspired by a commercial I’d seen for the live version of The Little Mermaid.

My Muse works in mysterious ways.

I was stuck on coming up with a nickname for Sebastian, because I didn’t look forward to typing that name over and over in a novel.  My running route was the perfect place to work out that issue.

Once I cleared that hurdle, further the ideas flowed.  Much like my scripts, these ideas played out in my head like a movie.  I could see the characters, listen to their conversation, see the setting, and watch the way they interacted.

As soon as I was done with my post-run shower, I fired up my laptop and typed up several pages of an outline for the novel.

This all happened because a fellow Modern Philosopher reached out to tell me how much she enjoyed my story.  Inspired by her faith in my writing abilities, I allowed myself to open my mind to the idea that this could be much more than a Halloween blog post.

Please know that your feedback means so much to me, and I do my best to pay it forward.  Writers inspiring writers.  It warms my heart.  Can you just feel the blog love?