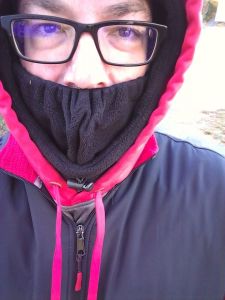 Maine is on a different schedule from the rest of the country when it comes to the dog days of winter, Modern Philosophers.

The 182 Days of Terror, otherwise known as Winter in Maine, began forty days ago on October 1.  We got our first snow yesterday, and when I woke up this morning, it was 21 degrees.

So I did the only sane thing: I stayed in bed under the warm covers!  Cali was curled up on my chest, purring up a storm, and I figured I would just wait out the cold.

The next time I checked the temperature, it was 19 degrees.  My strategy had backfired.  Time for a new plan.  I jumped out of bed, bundled up in my winter running gear, and headed out for a run before the mercury slid any further below the freezing mark!

As you can see from the above photo, I don’t fool around when it comes to running in the cold.  Not only did I wear my mask, but I also had on a second running coat, gloves, a long sleeved shirt, and long running spandex under my cold weather running pants.

People have told me I’m crazy to run when it’s that cold, but I can’t think of a better way to get warm.  Once I start sweating, I can’t tell that it’s below freezing.  All I know is that my heart it pumping, my blood is flowing, and all I want to do is collect steps.

This morning’s run was unusual in that the smell of fire was in the air.  Last night, there was a huge fire along my running path.  The roof of a new restaurant, that was still under construction, burst into flames around 5:00.  I could see the fire as I crossed the bridge on my way home from work, traffic was backed up, and there were flashing lights everywhere. 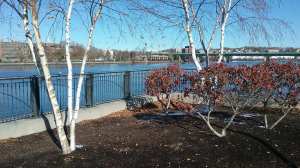 This morning, the path behind the restaurant was iced over from the run off of the water used to fight the blaze.

I stopped to look at the charred remains of the building, which was still standing, but the roof had collapsed.

A sad reminder that life can change in the blink of an eye.

I eventually got back to running.  Despite the temperatures, I made sure to do a long run because I wanted to feel alive after a long, stressful week.  Sometimes, I can convince myself that I’m running off the stress.  Other times, like this morning, I want to run to prove that the week hadn’t gotten the better of me.

I was still the idiot running in the frigid Maine morning.  Always a good sign.

When I started this running program two and a half years ago, I used to give up running once it got too cold.  Now, I keep going through the snow and frigid temperatures.  Like I said earlier, it’s a great way to get warm.

Sure, conventional wisdom might be to stay inside, crank up the heat, and put on some weight with comfort food to add a layer or two of fat for warmth.

I used to do that every winter, and I’d hate the rotund version of me who’d emerge from The House on the Hill once the snow had finally cleared, and the sun returned. 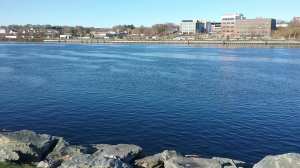 And so, I run through whatever Snow Miser decides to throw at me.  After all, I’m a Mainer now, and a little snow isn’t supposed to deter me from doing anything.

Besides, the river hasn’t even frozen over yet, which means we aren’t close to the coldest days winter has to offer…

Do you change up your workout routine for the winter?

Native New Yorker who's fled to the quiet life in Maine. I write movies, root for the Yankees, and shovel lots of snow.
View all posts by Austin →
This entry was posted in Fitness, Humor and tagged cold weather, Fitness, health, Humor, Maine, Modern Philosopher, running, sarcasm, satire, winter. Bookmark the permalink.

10 Responses to Running To Stay Warm