Searching For Motivation In The Snow

My love/hate relationship with running has taken on an “I think we should see other people” status recently, Modern Philosophers.

Winter is always a difficult time to stay motivated with my running program.  I always used to take winters off, which meant I then spent the entire spring and summer trying to take the winter weight off.

So I’ve vowed to keep hitting the road despite the snow, ice, cold, wind, creepy Snowmen stalkers, and Snow Miser.

But this year, it’s been rough.  And it’s not even technically winter yet.

In Maine, however, winter starts on October 1, and there is plenty of snow on the ground as a result of a big storm, that didn’t quite live up to its hype, but still left a mess in it wake earlier this week.

This is my first winter running down on the river walk, and it’s been a challenge already because of the way the frigid wind blasts in off the water.

Now, it’s gotten even more difficult because the city has chosen not to plow the path, despite the fact that so many people use it on a daily basis.

Being the wellness activist that I am, I decided to call City Hall on Thursday to complain about this stupid decision.

I was told that Parks & Rec has decided not to plow it because they were afraid people would slip on the path, and then slide into the river.

I countered that it was more likely that people would go the slip and slide route if the path wasn’t cleared of snow and ice.  I argued that the river walk was much safer than trying to run, walk, or bike on the roads where vehicles had to be factored into the equation.

So far, there has been no response from Parks & Rec, and I have no doubt in my mind that this is a “Ron Swanson hates helping tax payers” type of situation.

Needless to say, my runs have been challenging this week.  My first day out after the storm, I could barely make it along the path.  It was rather discouraging, my feet took forever to thaw, and I felt like I could make better time just by walking. 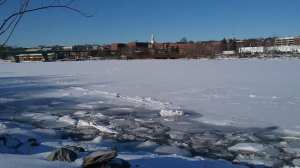 This morning, I didn’t even want to go for my run.  I knew the path wouldn’t be plowed, it was 17 degrees, and I didn’t feel like going back to my old route, which would be busy with weekend traffic.

I was able to convince myself to get out there, but I didn’t have much hope.

The motivation to run was gone, and I was fairly certain I’d trudge down to the water, see all the snow, and head right back to The House on the Hill.

But something about the view this morning took hold of me.  The Penobscot River was frozen over, and I could’ve run across it to visit Stephen King in Bangor.  I felt like I was in a postcard, and that silly idea gave me all the motivation I needed.

Clearly, my fellow exercise enthusiasts had not been deterred by the city’s refusal to plow.  So many people had used the path in the days since the storm that I could see a trail of snow flattened down by all the foot traffic.

So I ran along that makeshift path, which made my run less difficult.  Sure, it was still slippery in places, but running is more exciting when you throw in the occasional pitfall.

I soon learned that some plowing had been done by the restaurant at the end of the path, so I extended my run along the restaurant’s parking lot and the street in front of it. 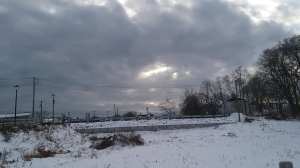 Obviously, I wasn’t setting any speed records, but I did complete my longest run of the week, which made me feel much better about the activity again.

It’s not like I’m in love with running, but we’ve decided to start seeing each again.

And that’s better than nothing, especially now when it would be so tempting to just stay inside under the covers, and eat all the comfort foods.

I went out expecting to find an excuse not to run, but instead found renewed interest in the snow.  I guess that’s why we shovel, because we never no what we might find once we clear away the mess Snow Miser has left behind…

Native New Yorker who's fled to the quiet life in Maine. I write movies, root for the Yankees, and shovel lots of snow.
View all posts by Austin →
This entry was posted in Fitness, Humor and tagged Fitness, health, Humor, Maine, Modern Philosopher, motivation, running, sarcasm, satire, snow, winter. Bookmark the permalink.

5 Responses to Searching For Motivation In The Snow