Where The Ice Finally Ends

Today, I discovered where the ice finally ends, Modern Philosophers, and it has given me hope.

Not just hope that Spring is on its way, but also hope that life is looking up in general.

Since I’m being both literal and metaphorical here, let me back this up a bit to give your brains a moment to wrap themselves around the Deep Thoughts I’m putting out there.

I woke up this morning eager to kick off my weekend with a run.  As I always do, I checked the temperature on my phone.  It was 21 degrees.

Seriously?  I know it’s March in Maine, but the Mercury managed to climb into the 50s earlier in the week, so I was hoping for a warmer weekend.

It was a long week, and I had planned to exorcise its demons with an even longer run.  I’m more apt to run further when it’s warmer and I’m not worrying about frostbite.

I decided to go back to sleep, and give the sun a chance to do its thing to heat my tiny portion of the planet.  I checked the temperature again about an hour later after I was awakened by the sound of the wind rattling the bedroom window.

Now it was 20 degrees.  And there was that wind. 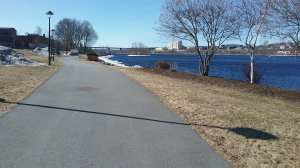 By the time I finally headed out for my run, it was 19 degrees and the wind was strong enough to make me worry I’d end up in Oz.

I was hoping to run along the river path.  I’d caught a glimpse of it as I’d driven over the bridge last night on my way home.

It looked like it was totally clear of ice and snow for the first time in months.  Of course, running along the river meant having to deal with even stronger winds.  So I decided to start along my alternate route, and then work my way down to the river.

When I finally got to the river, I was delighted to find that the path was clear.  The only problem was, the wind was way worse than I’d anticipated.  I decided to brave it, and started down the path.

Shortly thereafter, I made an amazing discovery.

As expected, the Penobscot River was frozen solid when I started along the path, doing my best to move forward despite the wind’s Herculean efforts to push me back like I was nothing more than a rag doll.

I stared at the blacktop, trying to protect my handsome face from windburn.  I kept wanting to turn around, but I was determined to make it to the end of the river walk, and prove that I could defeat Winter.

When I finally risked a peek at the road in front of me, that’s when I saw it… 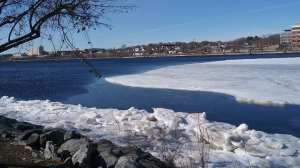 The place where the ice finally ended!

I was stunned.  The ice just suddenly ended, and the river flowed mightily along as if it hadn’t been trapped under an icy lid for the past few months.

There were little waves, I’m assuming from the powerful wind, and the water was a deep, beautiful blue.

I just stopped in my tracks to stare at the contrasting images.  Winter and Spring side by side in the Penobscot River.

There was hope.  Warmer weather and a sunnier outlook were on the horizon.

I ran to the end of the path, my face nearly frozen and definitely red from windburn, but I was smiling.

After the week I had, I needed Mother Nature to make this great reveal.  I had to be reminded that as thick and slippery as the ice gets, it eventually ends. 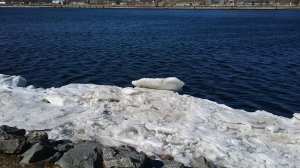 Right now, the wind is rattling the windows of The House on the Hill, and I have the heat cranked up to keep me warm, but I’m okay with that.

I’ve seen where the ice finally ends, and a renewed hope warms my heart…

Native New Yorker who's fled to the quiet life in Maine. I write movies, root for the Yankees, and shovel lots of snow.
View all posts by Austin →
This entry was posted in Fitness, Humor and tagged hope, Humor, life, Modern Philosopher, optimism, Philosophy, running, Sarcasm, satire, Spring, winter. Bookmark the permalink.

10 Responses to Where The Ice Finally Ends