A Madman Running Into A Storm 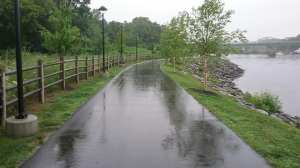 Anyone who knows me either in real life, or via my loquacious online persona, knows I am an introvert, who hates change and making any sort of major decisions, but truly loves running in the rain.

As a result, today was a very challenging one for me, Modern Philosophers.  So much so, that this might require the first ever serialization on my blog.  There is a good chance you will have to come back tomorrow to see how this story ends.

When I set out for my run today, the sky was dark with storm clouds, and it was obvious that rain was imminent.  Since I don’t like change, I wasn’t going to deviate from my routine and put off my run until the weather cleared.

Besides, running in the rain is my jam.  Not only does the steady patter of the raindrops soothe me, but the nasty weather also keeps other people off the road.  That really pleases my inner introvert.

Because a storm was brewing, I decided to run along the river again today.  I’d had good luck with that on Thursday, taking a chance and hitting my favorite path for the first time in months, so I figured I’d go for a repeat performance because no one else would be stupid enough to be out in the rain.

Now I’d heard something on the news about a tropical storm passing near Maine.  I wasn’t really paying attention, though.  I think the storm’s name was Faye, Hazel, or Esmeralda.  Definitely a name I’d associate with a grandmother or a maid from a 50s sitcom.

Before I’d even covered the fourth-tenths of a mile to the river, the skies had opened, and the full, merciless wrath of Tropical Storm Grandma Housekeeper had been unleashed upon the poor fool who enjoyed running in the rain.

I was drenched, Modern Philosophers.  Soaked to the skin.

I looked like I had gone for a swim in the river, and then poured another hundred gallons of water over my head.

I’m not sure if this picture does it justice, but I’m drowning a little inside because the rain had seeped through my skin.

That photo was taken at the very start of the path.  I wasn’t even half a mile in, and already, I’d absorbed more water than Aquaman after a night of sleeping with his mouth open on the ocean floor.

Like I mentioned earlier, I don’t like change.  I see deviation from my routine as a horrible character flaw for which there is no excuse.  I run every Saturday morning, so the run had to continue, even if that meant I was a madman running into a storm.

At least I was right about there being no one else around.  If you ever want to ensure proper social distancing on a run, head out into a downpour.

It was raining so hard that the path flooded and left me no option but to run through the mini lakes that had formed on the blacktop.  Ten hours later, my sneakers are still soaked.

When I got to the little tunnel along the route, I paused to get my bearings.  And to try to wring out my clothes.  And wipe off my glasses so I could see again.

After a quick assessment, I realized that the storm was not letting up, there was no way I could get any wetter, and I might as well just keep running.

As I sit here now, dry and safe on my couch inside The House on the Hill, I realize that my brain was drowning and could not perform basic functions.  Had there been even an ounce of rational thought inside my thick, yet saturated skull, I would have turned around and headed home.  I would not pass Go.  I would not collect $200.  I would not stop several times along the way to take more photos of my great underwater adventure.

But this creature of habit, by now an amphibious creature of questionable genus, just kept running.  Spurred on by the steady, squishy sound from my waterlogged socks, I set a pace and took full advantage of the Shower Feature supplied by the tropical storm whose name I still can’t remember.

The one silver lining in the unrelenting storm clouds was that I completed my deep sea adventure in very good time.

Normally, I’d joke that I don’t need a shower after running in the rain, but I couldn’t wait to take a warm shower.  It was the only way to ensure I’d cleared away all the sea life that had clung to my sweaty body during my run.

Some of you might foolishly ask if I’d learned my lesson.  Clearly, you’re the ones who don’t know me very well.

I will definitely still run in the rain if Mother Nature tries to interfere with a regularly scheduled run again.

And that wasn’t even the end of my Saturday adventures.  To find out what happened next, come back tomorrow!

Native New Yorker who's fled to the quiet life in Maine. I write movies, root for the Yankees, and shovel lots of snow.
View all posts by Austin →
This entry was posted in Fitness, Humor and tagged exercise, Fitness, health, Humor, introvert, Modern Philosopher, rain, running, Sarcasm, satire. Bookmark the permalink.

5 Responses to A Madman Running Into A Storm