Georgia Governor Looks To Turn The Walking Dead Into A Documentary 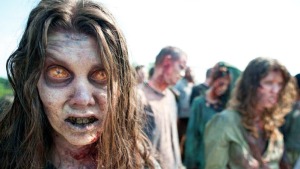 I don’t even know what to say anymore, Modern Philosophers, about people who refuse to wear a mask during a pandemic.

I mean, I know what I want to say, but this is a family friendly blog, so I can’t use the sort of language that feels appropriate.

Apparently, Georgia Governor Brian Kemp really likes what he sees when The Walking Dead shoots in his state because he appears intent on turning the hit show about the Zombie Apocalypse into a documentary.

Of course, I’m assuming Kemp understands that the show is fiction.

Then again, with the way the Coronavirus numbers are surging in Georgia, he might think those Zombies he sees on the streets are actual Georgians who will not be able to vote for him in the next election since one must be alive in order to cast a ballot. 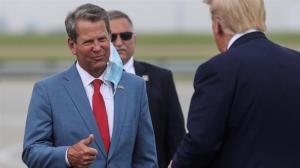 Governor Kemp, shown here demonstrating how the brain dead wear a mask in the presence of their overlord, decided to sue other leaders in his state for trying to enforce mandatory mask wearing rules.

The Governor of Georgia is suing the Mayor of Atlanta and other leaders for trying to enforce rules that make wearing a mask in public mandatory.

I had to type that out again just to make sure my use of symbols to cover up my foul language was appropriate.

I’m not sure whether to be infuriated, or to weep over how stupid people in this country have become.

This week, it was all over the news that Trump and his cronies were trying to throw Dr Fauci under the bus and blame him for the government’s mishandling of the pandemic.

Is it sad that I totally expected this to happen?  It’s become the norm of this administration to blame others, fan the fires of discontent, and take absolutely no responsibility.

How else could wearing a mask, the one thing that could help curtail the spread of a virus that had infected over THREE MILLION Americans, have become a political issue rather than a public health/common sense/basic decency issue? 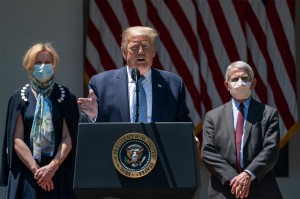 All the fingers of blame should be pointed at the very stable genius in this photo who isn’t wearing a mask.

I’ve got to say one positive thing about Trump, though.  The man was a visionary when he came up with the Make America Great Again battle cry.

The only problem is, he was four years too early with it.  Yes, we have to make our country great again, but only because of the damage he’s inflicted upon it over the past four years.

Maybe if he would just act Presidential for like two minutes and tell the entire country to wear masks, this part of the national nightmare could finally end, and tens of thousands of lives could be saved.

Perhaps he could sway the cult of the anti-mask to stop being so closed-minded, selfish, and just flat out stupid long enough for the country to hold on until there’s a vaccine.  And if he can’t, maybe he could use his Pied Piper-like hold over the anti-maskers to herd all of them into a large holding area (dare I suggest he build a wall around them???) where they can infect each other, but not the rest of the country.

It really is simple.  The CDC says that wearing a mask is “A critical tool in the fight against COVID-19 that could reduce the spread of the disease.”  Furthermore, CDC Director Robert Redfield stated, “Cloth face coverings are one of the most powerful weapons we have to stop and slow the spread of the virus, particularly when used universally within a community setting.

But let’s turn the conversation from the boneheads misleading our country, to someone who is leading by example. 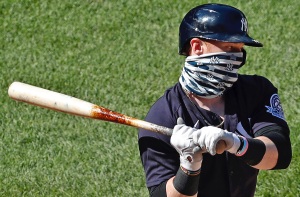 Clint Frazier is one of my favorite Yankees.  He is also a very polarizing figure among the team’s fan base.

This week, Frazier announced that he is going to wear a mask during games.  MLB has not required players to wear masks for the season that begins on July 23, so he is doing this by choice.

Frazier said he wanted to set an example, and this decision has made me like Red Thunder even more.  He mentioned that he’s taken some heat for it on social media, which again, has me wondering what the #$%^ is wrong with people?

Good for you, Clint!  Thank you for making this choice and setting a proper example. 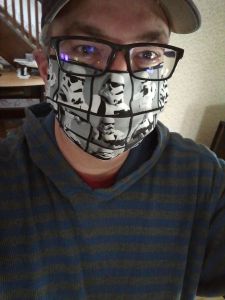 One again, I implore you to wear a mask when you go out in public.  Even if you hate it, or you feel like it’s an affront to your personal freedom, try to think of it as an unselfish act that will help get things back to (somewhat) normal again.

Can’t we all agree that’s it better to live, and be slightly uncomfortable or frustrated, than it is to die arguing over something that quite possibly contributed to your death and the death of numerous people around you?

Call me a sheep all you want, but I’m going to do what the experts say has the best chance of keeping me alive.

Native New Yorker who's fled to the quiet life in Maine. I write movies, root for the Yankees, and shovel lots of snow.
View all posts by Austin →
This entry was posted in Humor and tagged Brian Kemp, Clint Frazier, coronavirus, Donald Trump, Georgia, Humor, Modern Philosopher, Politics, satire, The Walking Dead, wear a mask. Bookmark the permalink.