Baseball Is Finally Back! 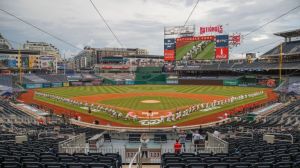 After months of bleakness and depression, during which I was out of work, cut off from the rest of the world, and fearing that I was going to become yet another victim of the pandemic that has been spreading unencumbered across the planet, I finally had a reason to smile, Modern Philosophers.

I know that in the grand scheme of things, the return of a sport shouldn’t be that big of a deal, but it was most welcome news at The House on the Hill.

Anyone who has met me or read this blog knows that I am a devout Yankees fan.  I was at Game 6 of the World Series when Reggie hit his three homers, I got married on the same day as Game 1 of the Yankees’ first World Series appearance in fifteen years, and some of my happiest memories of life in New York involved being at Yankee Stadium or watching Yankees games with close friends.

I’ve been an introvert almost as long as I’ve been a Yankees fan, and those two interests complement each other so well.  My plans for this weekend revolve around the Yankees’ TV schedule for tonight and tomorrow.

There’s nothing I’d rather do than sit home and watch the game.  Not only do I love baseball and my team, but it’s also a great distraction for my ever running mind.  I love listening to the announcers talk about baseball, strategy, and Yankees history.  I’m constantly calculating statistics in my head.

Having the game on in the background is the best company when I’m writing.  And when I want more company, I turn to my friends on Yankees Twitter.  If you are a Yankees fan, but aren’t a part of Yankees Twitter, you need to correct that.  It’s a great group of fans, who know way too much about my favorite team, and no one is afraid to share an opinion.  Plus, they’re always tweeting out clips from the game, which is perfect for the nights when the Bronx Bombers aren’t on TV in Maine.

Thursday was Opening Day, and the Yankees played the Washington Nationals.  I woke up that morning like a kid on Christmas morning.  For the first time in ages, I looked forward to going to work because it meant I was that much closer to leaving work to return home for the game.

Of course, the return of the Yankees means the return of baseball snacks!  I was even willing to set aside my anxiety about going to the grocery store during a pandemic in order to pick up treats for the game.

I don’t need a team of leading scientists to tell me that there is a direct correlation between yummy food in my tummy and a smile on my face.  Throw the Yankees into that mix, and it will chase away all the dark clouds.

Speaking of leading scientists and dark clouds, both made an appearance on Opening Night.  Dr. Anthony Fauci threw out the first pitch, and massive storm clouds brought rain.

Because it wouldn’t be 2020 if something that made me happy wasn’t cut short.

Sure, the rain caused the game to be called in the sixth inning, but that could not wash away my happiness and excitement at the return of baseball.

And Gerrit Cole, the Yankees’ big name free agent acquisition of the off season, picked up the win with five strong innings that proved he will be the ace the Yankees needed.

Maybe the best part of it all is that I get to enjoy the games again tonight and tomorrow.  The cupboards are stocked with baseball snacks, and watching the game alone is the best way to social distance.  If I want to feel super safe, I can always wear my Yankees mask. 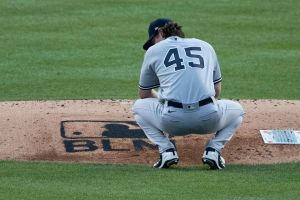 We need to find happiness in anything we can right now.  These are challenging times, the pandemic shows no sign of releasing its grip on our nation, and I don’t trust the man in charge to lead us out of danger.

I’m going to put my trust in the Bronx Bombers to lead me out of a state of despair and to a World Series Championship.

Hope is the light that can urge us forward during the darkest times.  My hope is that the Yankees will remind me that life is still enjoyable and only going to get better.

Are you excited that baseball is back?  What is keeping you going during these challenging times?  Does your favorite team have a rabid Twitter following?

8 Responses to Baseball Is Finally Back!