It’s A Mask, Not A Mustache 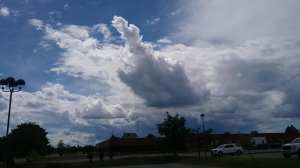 Aaron and Holly sat in silence on his front porch.  It was his favorite place to hang out, and Holly considered herself lucky that he allowed her to share this sacred location.

After all, in the days of COVID Chaos, Aaron was more anxious than ever.  She would have totally understood if she’d been banned from the porch where he did most of his writing, and she considered it an honor that she was granted access.

They sat a good ten feet apart, and they both had their masks at the ready should Aaron decide that the virus was closing in on them.  Plus, he was very close to the front door so he could bolt inside if the outside world became too much of a threat.

On this afternoon, though, stress levels were within the acceptable range, so they were enjoying a drink on the porch in the afternoon sun.  Aaron had his usual Snapple, while Holly had settled on ice water.

“I went to the grocery store last night,” he finally broke the silence.

“How bold of you,” she replied mockingly with a smile.

“Well, I have to eat, and the fridge can only hold so much food at one time,” he continued undeterred by her sass.  “Besides, you’ve convinced me that I have to make more of an effort to venture outside of my bubble as long as I take the usual precautions.”

“I never said ‘usual precautions’.  Because according to your insanely over the top guidelines of how to be among the masses during a pandemic, that would require everyone to remain at least ten feet away from you, to preferably get down on their knees and turn away from you, and to hold their breath until you were out of sight.”

“I think you’re exaggerating,” he mumbled and took a sip of his iced tea.

“No, I’m not,” she answered defiantly.  “You made me read your manifesto after you wrote it, and I remember telling you it was the best piece of satire you’d written in ages.  Then you didn’t speak to me for two days.”

“For the record, I never called it a manifesto,” he clarified.  “It was a carefully written set of guidelines for venturing out in public during a pandemic that I planned to submit to the CDC.  That is, until you mocked it.”

“Every writer needs a good editor,” Holly answered with a smile.  “So tell me about your shopping trip.  Clearly it went well since you are alive to tell the tale.”

She put her feet up on the porch railing to get comfortable.  This had all the earmarks of one of Aaron’s trademark rants, so she wanted to be cozy for it.

“Everything was fine until these two ladies decided they were not only going to defy the flow of traffic clearly defined by the colorful arrows all over the floor of the store, but also that they were going follow me down every aisle.  Albeit in the opposite direction!”

He needed a long chug of Snapple to wash away the bad taste of that memory.

“Please tell me you said something to them about going the wrong way,” she pleaded.

“No,” he disappointed her.  “I wasn’t about to start an altercation with this diabolical duo, and that’s not because I dislike confrontation.  I’m all about speaking my mind.”

“The reason I held my tongue was because I could see theirs!” he revealed.

“They weren’t wearing masks?” she asked in confusion because it was a state law that masks had to be worn in grocery stores.

“Oh, they were wearing masks,” Aaron informed me.  “They were just wearing them as if they had no understanding of how masks worked.  In other words, they decided to go with the under the nose look, which eventually became under the mouth as they yapped away, spewing droplets in all directions.”

“Your ‘on their knees and turned away from you’ plan suddenly has merit,” she admitted.

“I so badly wanted to get in their faces and yell that it was a mask, no a mustache, so it shouldn’t be worn under the nose,” he growled.  “But that would be akin to painting a giant red X on my respiratory system for the germs to hone in on, and I’m not insane.”

Holly rolled her eyes as if to say that was open to debate.

“What did you do instead?” she wondered.

“I skipped several aisles ahead to get away from them, and then doubled back to hit the aisles I’d missed once they’d headed to the counter to pay,” he replied as if it were the only logical answer.

“I do not understand what’s so difficult about wearing a mask,” Holly said rhetorically.

Aaron knew his best friend well enough to understand she was venting with the statement, and didn’t expect an answer.  He had plenty of theories as to why so many people were mask challenged, and at some point, he planned to share those theories with her.

Right now, though, he just wanted to enjoy the company of the one person in the world he’d ever allow to get within six feet of him if push came to shove…

Native New Yorker who's fled to the quiet life in Maine. I write movies, root for the Yankees, and shovel lots of snow.
View all posts by Austin →
This entry was posted in Humor and tagged coronavirus, Covid 19, flash fiction, Humor, mask up, Modern Philosopher, Sarcasm, satire, short story, social distancing, wear a mask. Bookmark the permalink.

5 Responses to It’s A Mask, Not A Mustache