The Week That Wasn’t

This was a very confusing and stressful week, Modern Philosophers.

I’ve made it a point to not watch the news anymore, but I’ve had CNN and MSNBC on all day to keep tabs on what is going on with the President and his COVID-19 diagnosis.

Generally, I get my news from Stephen Colbert and Seth Meyers, but neither of them had a new show last night.  So I’ve had to resort to listening to the real newscasters deliver their bleak outlook on the world without jokes or funny voices.

It’s a bit difficult to swallow.

Thankfully, I’ve had plenty of Snapple to wash it down.

I know some of you are itching for me to write a post about Trump and his coming down with Coronavirus, but the nuns raised me not to kick a man when he’s down.

Plus, it’s just bad juju to mess with karma.  I don’t want anything bad to happen to me, so I’m going to steer clear of trying to make humor out of such a serious situation.

I will, however, deflect from the seriousness of the situation with some writing.  That’s always been my escape, and I think it’s time to jettison the escape pod to get the hell aware from the dumpster fire that is the world outside The House on the Hill. 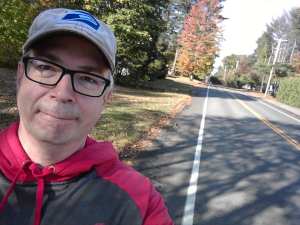 I went for a long run this morning when I realized that watching the news wasn’t going to get me anywhere other than depressed and despondent.  I needed to get outside and feel alive.  If I could sweat a little and get my heart pumping, at the very least, I wouldn’t feel as guilty about eating the waffles and sausages I had planned for breakfast.

Plus, running has always been my escape from the perils of the pandemic.  I keep telling myself that the best way to fend off a virus that attacks the respiratory system is to get my heart and lungs into great shape.

It really looked gorgeous out on the road.  Yes, I passed a plethora of political signs along my route, but I put all thoughts of the election out of my mind.

Instead, I focused on the beautiful colors all around me.  Maine does look pretty snazzy once the leaves begin to turn.

This morning, the trees weren’t yet in full Fall Foliage mode, but they were definitely on their way.

I kept myself further distracted by thinking about the Yankees’ big playoff win this week.

My beloved Bronx Bombers swept the Cleveland Indians in the first round of the playoffs to advance to the next round against the Tampa Bay Rays.  And the clincher was a real classic as they fell behind 4-0 in the first inning, and then scored 2 in the top of the ninth to win 10-9.

Since the Red Sox really sucked this year, the Rays have become the Yanks’ new rival in the division.  The team from Tampa kicked the Yankees’ butts during the regular season, but I’m hoping things change in the ALDS.

Because of the Coronavirus, these games will be played in San Diego without any fans in attendance.  This might actually benefit the Yankees because Tampa Bay’s ugly dome has been a house of horrors for them this year.

Maybe playing in sunny Southern California will give the Bombers a much needed psychological edge since they probably feel like they can’t win in dreary Tampa.

I also got through this week by reaching out to a friend from my past.  I looked up someone who I was very close to at my first job after college, but haven’t seen since I left New York.

It has been cool catching up and reconnecting as we talk about the good old days.

Of course, any kind of reminiscing like that is going to get me questioning if I made some stupid life decisions in my twenties.  But I already know I did, so I guess all this did was drive home that point.

On the plus side, it has given me the motivation to get to work on my time machine again.  That project had basically come to a halt because it’s been next to impossible to get parts during the pandemic.  Plus, all the scientists that I pump for information on my time travel calculations have been so busy trying to either come up with a vaccine, or building their own time machine to get the hell out of 2020.

I’ve wasted part of my afternoon trying to figure out how the hell to use this new editor on WordPress.  I’ve started and deleted about half a dozen posts because I couldn’t insert photos and make the text look right.

Big shout out to my blogger buddy Bill, who saw my frustrated tweet about the changes to WordPress, and told me how to get back to the classic editor.

I don’t like change.  I hate it.  Thanks, Bill, for saving my blog because I was about to pull the plug on it.

Lastly, I got through the day by trying a different take on the blog.  I have a friend who enjoys my reading to her.  So I made a recording of my favorite short story on the blog.

What would you guys think of the occasional post that was a recording of me telling you a story, rather than my typing it up as a blog post?  Let me know if there would be any interest in that because that could be a way to inject some new life into this.

Hope you’re all well.  I know it’s been a rough week for me…

Native New Yorker who's fled to the quiet life in Maine. I write movies, root for the Yankees, and shovel lots of snow.
View all posts by Austin →
This entry was posted in Humor and tagged Humor, Politics, Relationships, Sarcasm, satire, Trump, Yankees. Bookmark the permalink.

10 Responses to The Week That Wasn’t