I haven’t been this enthusiastic about voting since my Residence Hall Government Election during my Junior year of college, Modern Philosophers.

Back then, I was a first time candidate running for President, and I didn’t think I had much of a shot at winning.

I also didn’t want it to be a unanimous vote in my opponent’s favor, so I was very eager to cast a vote for Austin.

Somehow, I managed to win the election and get re-elected in my Senior year.  If colleges didn’t have term limits on how long you could live in a dorm, I might still be President to this day.

But I’m getting really off topic here, so let me rein myself in before this post goes completely off the rails.  Kind of like our country has in the last four years…

I vote every year, but this election seems to be more important than any in recent history.  I’m not proud of what my country has become under its current President, and I’m not the kind of person to complain about a problem, but not do anything about it.

I share my views on this blog, but that doesn’t mean anything if I don’t cast my vote for change.  So I did my research to figure out how to get an absentee ballot. 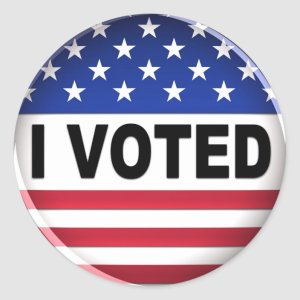 I’ve always voted in person, but there’s no way I want to wait in line indoors during a pandemic.  Not that I don’t enjoy the company of my neighbors, but these are extraordinary times and I’m all about taking precautions.

Getting an absentee ballot proved to be extremely simple.  I made my request on the State of Maine site, quickly received a reply by email, and then got a follow up email from my city stating that my request had been approved.  That email told me when I should expect to receive my ballot.

The ballot arrived last week, I filled it out, and then brought it to City Hall on Wednesday because I got off work early.  I didn’t want to risk putting it in the mail to allow for any shenanigans to occur, and I wanted the peace of mind of knowing that my ballot had been officially received and would be counted.

When I showed up at City Hall at 3:15 on Wednesday, I was thrilled to see that there were four people ahead of me to turn in ballots.  I figured the place would be dead at that time, so that was very encouraging.

The City Clerk took care of business very quickly.  I was in and out of City Hall in five minutes.  In 2016, it took me an hour and a half to vote and then wait in line to get to the machine where I actually turned in my ballot.  That was a very frustrating process, but I wanted to do my civic duty and exercise my right to vote.

But I’ll take 5 minutes over 90 any Election Day, pandemic or not.

So I guess my question now is: Did it work?

I’ve cast my vote.  I’ve made my voice heard.  I didn’t just sit back and complain about the state of my nation.

Did it work?  Did my vote bring about the changes we need so that I’ll no longer be embarrassed by my country’s government?

I’ve got to be honest, Modern Philosophers, if it didn’t work, I’m not sure how I’m going to survive the next four years.  I do not like what’s going on in my country, and if we continue even further down this dimly lit path, following the light of the tiki torches in the distance, I’m afraid we’ll find ourselves in one of those dystopian future movies that are suppose to frighten us from ever allowing things to get so out of hand.

So I urge you to vote, Modern Philosophers.  Be the change that will prevent me from ever knowing if I could survive Purge Night of The Hunger Games!