I’ll Take My Snow On The Rocks 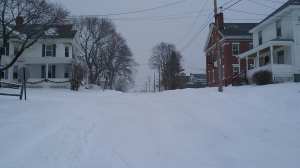 Like I mentioned in yesterday’s post, Modern Philosophers, there was a blizzard headed for The House on the Hill.

I woke up in the middle of the night to heed the call of nature, and a peek out the window revealed that Mother Nature was hard at work.

When everything outside the window is white, I know I need to get up early to do some serious shoveling.

Since this storm made no secret it was coming to town, my non-writing job had already made the decision to delay opening for a couple of hours.  That allowed me to get up at my normal time, put on my running gear, and trade in my morning run for a brisk round of snow shoveling.

There’s nothing worse than exhausting myself shoveling, and then having to immediately head off to work.  Today, however, allowed me a rest period between the two activities and it was much appreciated.

And I enjoyed the peanut butter and jelly sandwich I had for breakfast.

Some things never change, though.  Even with all the preparation it had for today’s storm, my city didn’t do a great job of clearing the streets.  The trek from my driveway to the bridge that leads to Stephen King’s side of the river was treacherous. 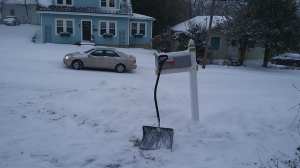 Thankfully, the RAV doesn’t let annoying piles of snow in the middle of the road deter it from going on its merry way.

The work day was quiet because (Surprise, Surprise!!!), no one wanted to go out in the storm to visit my office.

The powers that be decided to close up shop early, which was delightful since the snow changed over to icy rain.  As much as I trust the RAV, I don’t trust other drivers when the roads are covered in a sheet of ice.

The early departure allowed me to head home while it was still light out…well, as light as it can be with storm clouds dominating the sky.

When I arrived at The House on the Hill, I had one more round of shoveling waiting for me.  By now, the snow was heavy with ice, so my arms and shoulders got a very good workout.

As an added bonus to my snowy day, the oil company filled my tank this morning.  So now that I’m home, and the snow shovel has been returned to its resting place, I’m able to relax in a toasty warm house and write this post.

Sure, days like this make me wonder if I really hated sunny southern California that much (the answer is always a resounding “Yes!”), and I’ll never love the idea of Maine as a Winter Wonderland, but I might finally be learning to co-exist with snow.

But if I didn’t have to shovel snow again this winter, I definitely wouldn’t complain.  Here’s to hoping the shovel stays put..

Native New Yorker who's fled to the quiet life in Maine. I write movies, root for the Yankees, and shovel lots of snow.
View all posts by Austin →
This entry was posted in Humor and tagged Blizzard, Humor, life, Maine, Modern Philosopher, Sarcasm, satire, snow. Bookmark the permalink.

4 Responses to I’ll Take My Snow On The Rocks