A War Of Snow And Roses

I’m constantly telling people that it never stops snowing in Maine, but I’m not sure everyone takes me seriously, Modern Philosophers.

I know it might be hard for some to imagine a world that is forever covered in white.  I feel sorry for those people because you’d have to be cursed with a horrible imagination to be unable to conjure up that one in your mind.

And despite the title, it is not about The Hunger Games.  But I’ll give bonus points to those who went in that direction.  President Snow would be proud, and might offer you one of his prized roses.

I’d suggest you not accept that gift, though.  It’s probably poison.

Today was one of those days that made me feel like I lived in a snow globe.  My office doesn’t have windows, but every time I ventured out, my eyes were drawn to the snow falling in the parking lot.

It was a steady snow, but it fell slowly.  Not the kind of snow that causes any stress because it’s not going to stick, or cause disruption to my evening commute.

It was just a reminder that it never stops snowing in Maine.

At least it was Friday.  The last day of a long, snowy week.  Today’s snow was a distraction on my path to the weekend.  It’s actually kind of pretty when it’s not annoying me.

I’m definitely look forward to the weekend.  Two days without work is always pleasing, but this weekend has a little extra going for it.

There’s the Super Bowl for one.

I’m not as excited about Sunday as I would be if the Jets were playing, but it’s been many years since I made peace with the fact that I will never see my beloved team play in the big game during my lifetime.  They had their one shot at glory, and they selfishly chose to take it before I was born.

Despite this little issue with the Jets, I still put together a nice menu for Sunday night.  I enjoy watching the Chiefs, and I’ve never liked Brady, so I’ll be rooting for the team that’s able to provide me with the Patrick Price for my insurance.

Of course, I added a little something to the tie to give it the extra pizzazz it needed to go along with the overall ramped up vibe of the weekend.

Yes, that’s David Rose lording over it all from his perch on my tie clip.

I don’t think David really cares about the game, but he is excited about what’s happening Saturday night.

And I am very pumped about that.  It’s no secret that I am a huge fan of Schitt’s Creek.  Sure, in typical Austin fashion, I was late to the show because I don’t have Netflix, but once it came into my life via Comedy Central, I was hooked.

I’ve watched the entire series, gobbling it up in five episode bites every weekend.  I’m now on my second watching since Comedy Central went right back to the Pilot and is airing them in order again.

Not only do I love the show, but I’m also a big fan of Dan Levy.  His writing is amazing, his acting induces fits of laughter that leave me gasping for air, and his message is right on point for where I’d love the world to be.

I’ve watched a ton of interviews and behind the scene specials about the show.

Whenever I enjoy anything Schitt’s Creek related, it reminds me why I want to be a writer.  I’m inspired to get up off my ass and be creative.

When I watch Schitt’s Creek, I remember that I’ve created my own TV series inspired by my life in college.  It makes me feel like I share a mindset with Dan Levy.  Instead of waiting for writing jobs to come to me, I sat down and created my own opportunity.

There was interest in my series from the network that airs The Nite Show, but everything got put on hold when the pandemic hit.

After watching six seasons of the Rose family’s adventures in Schitt’s Creek, I now, more than ever, want to shepherd my series to the air.

With that in mind, I brought David Rose home from my office this weekend so that we can watch SNL together.  And so he can inspire me to get some serious writing done. 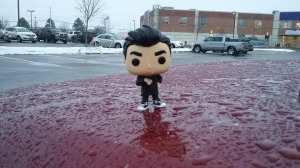 Sure, he seemed more interested in posing for glam photos in the RAV-4, but I get it.  He’s been cooped up in a boring workspace for the past few weeks.  That’s got to be worse than that dingy room at the Rosebud Motel.

I think, however, that once David settles in at The House on the Hill, he’ll want to play the role of Muse to my writer with something to prove.

After all, what else is there to do this weekend?  All it’s supposed to do is snow… 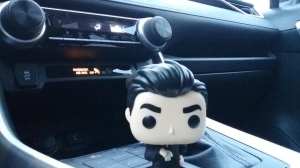 Eww, David!!!  Stop staring at me while I’m trying to drive!

10 Responses to A War Of Snow And Roses