Not So Super Sunday

Holly waited for Aaron to lower his mask and take a sip of his Snapple before she hit him with her question.

“Are you going to watch the Super Bowl?”

She knew he was going to give her some sort of wise ass answer, so the best strategy was to catch him at a moment when he couldn’t immediately snap back at her with the first witty reply that popped into his head.

Since Aaron knew exactly what she was doing, he took a second sip of his iced tea, and then slowly returned his mask to the ready position.  Then he just stared at her for a moment from his bench on his side of the running path.

“Did something change?” he asked his best friend.  “Are the Jets suddenly playing?”

Holly chuckled and rolled her eyes.

“If waiting for the Jets to be playing was your one criteria for watching the Super Bowl, then you would never watch the game, my friend,” she quipped.

Holly stood up and proudly pointed at the Patriots logo on her wool hat.

“Don’t get mad at me because you choose to root for a bunch of losers,” she commanded as she sat back down on her bench.  “And don’t give me that argument about how since you are from New York, you have to root for a New York team.  You’ve lived in Maine long enough to change your allegiance.”

“How did your Patsies do this year, Holly?” he shot back at her with the sort of vengeance one would expect from a New York/Boston sports argument.  “They looked like crap, but their former golden boy quarterback is playing in the big game today.  Leads me to think that their success was all about Brady, and that your team is just as bad as mine without him.”

Holly sipped her coffee and glared across the path at her best friend.  She wanted to strangle him for daring to compare the Patriots to the Jets, but in order to do so, she’d have to break his very strict social distancing rules.

“So are you watching the game?” she asked again once the anger had subsided and she no longer wanted to cause him bodily harm.

“Of course I’m watching it,” he replied with a shake of his head.  “It’s February in Maine during a pandemic.  What the hell else am I going to do?” 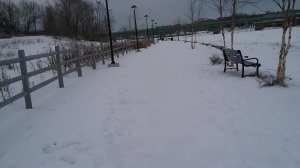 She nodded as this was a fair point.  “What kind of spread have you got?”

Aaron’s big brown eyes lit up at the query.  “Pepperoni and cheese.  Obviously.”

“Your Dad’s go to appetizer for any special event,” Holly added.

“Then there’s chips and dip, and a main dish of orange shrimp and french fries.  All yummy finger food for one,” he informed her proudly.

“And I miss having you over,” he admitted in a rare display of affection towards his best friend.  He was probably just feeling guilty about his mean comments in regards to her favorite team.

“I guess that makes this a not so Super Sunday,” she offered with a smile that he could not see because of her mask.

“Well, if people are responsible today, and don’t turn it into a Super Spreader Sunday, then we should be on schedule for a Super Bowl party at my house next year.”

“Yeah, but what are the odds that people are going to be responsible?” she asked glumly since she already knew the answer.

“Maybe they’ll surprise us,” he said hopefully.  “Just like the Jets will next year…”

Holly laughed so hard that she fell off her bench.  Aaron made no move to help her up because he had long ago accepted that Patriots fans were totally beyond saving.

1 Response to Not So Super Sunday