A New Grip On Reality

Regular readers of this blog might have noticed the vanishing act I pulled on Tuesday morning, Modern Philosophers.

I wrote a post Monday night about receiving my second Coronavirus vaccination.  Then I deleted it about twelve hours later.

I wanted to write honestly about how I’d felt over the past year, as I struggled to deal with the pandemic.  I really opened up in the post because I just wanted to get it all out of my system.

When I woke up on Tuesday, I realized I was done being so vulnerable and made the executive decision to remove the post.  It had served its purpose, and I was ready to move on with my life.

I will share, however, that I made it through the hours after that second dose with very minimal side effects.  I had a headache, was extremely thirsty all night, and then dealt with some sudden and severe stomach issues that went away after half an hour.

The next day, I was able to go to work as there was no fever, and just a steady headache that I handled with ibuprofen.  I did grow very tired in the afternoon, but that might have been because I hadn’t slept well due to my having to get up every hour to pee because I went overboard with the hydrating.

There is another change I made this week that I’d like to share on the blog.  I can’t guarantee the post with still be around tomorrow, so you’d better read it tonight, and call all your friends and tell them to read it before it’s gone.

As you might know, I run a lot.  This means I’m out on the mean streets of Maine in the winter despite all the ice and snow.  Never once over all those years had I ever run in anything other than my sneakers. 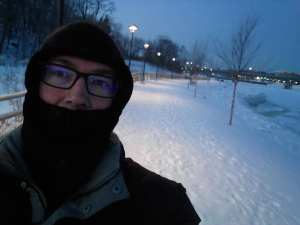 As a result, King Klutz did some major slipping, sliding, falling, and stumbling on the unsteady terrain.

That all changed on Tuesday when a friend sent me a pair of YakTrax to put on my sneakers.  They’re like cleats or spikes that help a runner get a better grip.

We all know I need to get a grip!

Wednesday morning, I trudged down to the river path.  As you can see from the pics in this post, it was covered in snow and ice.

For the first time in all the years I’ve run on ice and snow in Maine, I was able to complete my journey without constantly sliding and losing my balance.

Once again, I had to question why I’m so damn stubborn about change and trying something new.  I should have gotten a pair of those spikes years ago! 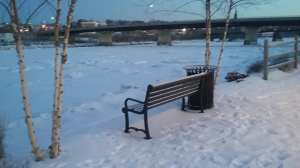 I’m looking forward to my runs through July, which is about when the snow will finally melt around here!

So that was two big changes this week.  Now I’m vaccinated against the virus, and able to run on snow.  What a crazy few days!

It’s weird because I know I should feel like life is changing because I’ve had my shots, but it’s hard to think that way when I’m still following strict social distancing protocols.

Nothing seems different, but I guess in the back of the mind, I know I’m at a much lower risk than I was before I received the vaccine.

Maybe it will sink in when the warmer weather arrives, and I’m able to spend more time outdoors.  Even though I am an introvert, I do look forward to living a life beyond the confines of The House on the Hill and my office.

Remember how excited I was about Dan Levy hosting SNL this week?  Well, I was a little conflicted about that one sketch that had Dan sharing an “out there” theory about Doc Brown and Marty McFly.  I had to address it on Twitter today…

Doc having a heated argument with David about that @nbcsnl sketch about Doc grooming Marty… @danjlevy pic.twitter.com/QMhsRA5h21

Native New Yorker who's fled to the quiet life in Maine. I write movies, root for the Yankees, and shovel lots of snow.
View all posts by Austin →
This entry was posted in Fitness, Humor and tagged coronavirus, Fitness, health, Humor, Maine, Modern Philosopher, running, Sarcasm, satire, social distancing, vaccine. Bookmark the permalink.

9 Responses to A New Grip On Reality