Why Not Make It A Great Friday?

Growing up Catholic, this was a day that always confused me.  Even back then, dressed in my Catholic school boy uniform, I was still metaphorically wearing the toga of the Modern Philosopher.

The thing was, I just couldn’t understand why the Church had decided to go with “Good Friday” as the name for the day.

After all, this was the day when Jesus had been crucified.  Doesn’t sound like a good day to me at all.  In fact, it sounds like a downright sad and depressing day.  The kind of day that would really rile up those who opposed the death penalty.  So why call it Good Friday?

I think over the years I heard murmurs that the name was symbolic, if not ironic.  It was a good day for us because Jesus had died for our sins, thereby saving us and such.  The Church wanted to celebrate the day so that it didn’t seem like the “bad guys” had defeated us when they killed Jesus.

Those explanations never really made sense to me, and I have to admit that it took absolutely every bit of my self control to not raise my hand every year to ask the Nuns why it was called Good Friday.

I especially had to bite my tongue because I really wanted to add something like, “I bet Jesus doesn’t remember anything good about that day!”.

But I feared the Nuns, so I never asked my question.

They probably would have thrown me out of Catholic school had I dared posed that one and then made my follow up comment.

To this day, though, I still don’t understand why it’s called Good Friday.

The Church is all about solemnity, so why not give it a more mournful and serious name?

Maybe I’ll tweet the Pope and see what he has to say about it.

Of course, whenever The Nite Show airs around Easter, I write a few jokes about Good Friday, and there is inevitably one in there about the name of the day.  This year, I submitted this…

Yesterday was Good Friday, although something tells me Jesus never refers to it that way.

For some reason, Danny didn’t pick that one for the monologue.  I bet the Nuns pressured him not to use it.  Their reach knows no bounds, obviously.

I also had another one I really liked, but figured Danny wouldn’t use…

Yesterday was Good Friday.  I tried to make it a great Friday, but my wife said she had a headache.

You have to admit that’s funny, but I get it.  Danny doesn’t likes to keep it clean, and that one implies naughty behavior, which the Nuns would definitely frown upon given it was Good Friday.

I also thought this one was worthy of a chuckle…

Yesterday was Good Friday.  Based upon how the monologue has gone so far, I’d say today is About Average Saturday. 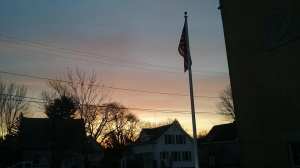 That one pokes fun at the writers, which means I was basically making fun of myself.  They all can’t be winners, but when you have to stand for three hours under the hot stage lights holding the cue cards, you kind of hope some of your favorite jokes will be written on them.

As for me, I’m having a great Friday.  I took the day off, so I slept in, and now I get to relax, write all day, and feast on Easter candy that I bought for myself.

Was there ever something you really wanted to ask about when you were in school, but didn’t because you were afraid of how the teacher would react?

Native New Yorker who's fled to the quiet life in Maine. I write movies, root for the Yankees, and shovel lots of snow.
View all posts by Austin →
This entry was posted in Humor and tagged Easter, Good Friday, Humor, Modern Philosopher, Nuns, Religion, Sarcasm, satire, The Nite Show. Bookmark the permalink.

12 Responses to Why Not Make It A Great Friday?