“What did the Captain mean when he said we could be called the Jock Squad?” Wally asked full of wide eyed innocence.  “Did you used to play ball?”

Bruno sat at his desk, intently reading a very detailed text from Maggie about how she planned to devour his lasagna.

“Why do you ask?” Bruno said distractedly without looking up from his phone.  “You trying to bond and get all social networky?”

Wally shrugged.  “I thought I should get to know you if we’re gonna work together…”

Bruno quickly cut him off.  “I hate to break it to you, kid, but when this case is done, you’re going back to being a rookie beat cop, while I get to remain up here in the rarefied air that is Detective Land.”

Bruno pocketed his phone and finally looked over at the rookie, who slumped a little lower in a chair borrowed from an unoccupied desk.  His body language made it clear that Bruno’s response had hurt his feelings.

Despite rumors to the contrary, Bruno had both a heart and a conscience.

“Look, unapproachable introvert is my default factory setting,” Bruno explained in the closest he might ever get to sounding apologetic.  “In another lifetime, I played baseball.  If we’re done braiding each other’s hair, do you think we could maybe find this corpse you lost?”

Wally smiled and sat up in his chair.  “What’s our next move?  We go up to Gang Division and ask for information on the gang that wears purple bandanas?”

Bruno shook his head and let out a soft sigh like a parent who’s disappointed after his kid screws up his lines at the third grade recital.

“You never go to another department hat in hand,” Bruno preached.  “That makes you look weak, and like you owe them something.  You only go when you got ammunition.  Something that makes you look smarter than them, or like you’re handing them info and putting them in your debt.  Got it?” 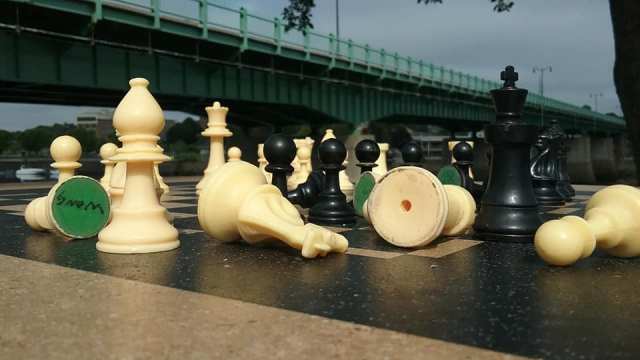 “We don’t need those arrogant pricks upstairs to find out about the bandanas,” Bruno added as he turned to his computer and quickly typed a few words.  “They would be a fraternal scumbag organization calling themselves The Heathens.  Ain’t that a perfect fit with our scary Nun and the ever growing shadow the Church has cast over our case?”

Wally just nodded.  Wisely, he kept silent and listened as a Master Class was in session.

“Speaking about Sister Mary Tarantula, something she said has been banging around in my head.  I gotta hunch if we look into it, it’ll give us the ammo we need to pay a visit on the Gang Division.  You ready to do a little legwork?”

“I hope you’re up to date on your shots and vaccinations then,” Bruno informed him as he got up from his desk.

Wally looked confused.  “Where the hell are we going?”

“One of the most dangerous places in the city,” Bruno replied and then made a point to pocket two extra clips of ammunition from his desk drawer.

Native New Yorker who's fled to the quiet life in Maine. I write movies, root for the Yankees, and shovel lots of snow.
View all posts by Austin →
This entry was posted in Humor and tagged cops, crime, detective, investigation, Modern Philosopher, murder, mystery, serial, short story, writing. Bookmark the permalink.

11 Responses to The Vanishing Corpse, Part 9