“You sent me a text on Friday that I want to talk about now that we’re face to face,” Holly informed Aaron before taking a large sip of her coffee.

It was an overcast Sunday morning in Maine, and the best friends were seated on their favorite bench that overlooked the river.

“Sure, but you’re going to have to be more specific because I send you a lot of texts,” Aaron remarked with a smirk.

“I kept it so that I could quote it exactly,” she replied because Holly was the kind of person who was always prepared.

She pulled up the text on her phone and then read it aloud.  “Hey. I’m going to see a couple of authors speak at the library. Look at me leaving the house on a Friday night in a non-hostage situation.”

“I thought you would be floored by my unscheduled journey outside of the bunker,” he quipped.

“That I was,” Holly confessed.  “I thought it was just a joke, you know, because you fancy yourself to be quite hilarious.  But then you sent me a photo about fifteen minutes later of you in a very small room, that was strangely empty aside from two older men who looked quite lost.  The three of you looked like you were sweating profusely.  It’s quite a nod to your photography skills that you could convey such despair in a single cell phone pic.  I swear I experienced claustrophobia simply by looking at it.”

Aaron chuckled.  “Finally putting that film school degree to use.  Those septuagenarians in the background were the speakers for the evening.  Yes, the room was tiny, empty, and extremely warm.  For some reason, the library couldn’t seem to figure out how to turn on the air conditioning after hours.  Perhaps the gerbils that run on little belts that power it have a strict no overtime policy.”

Holly reached across the bench to smack him playfully on the shoulder.

“That’s my hometown library you’re dissing.  You’d best be careful,” she warned with a giggle.

Aaron rubbed his shoulder to try to make her feel guilty.

He was not at all successful in his ruse.

“So did you enjoy the event, climate conditions not withstanding?” she asked.

“It was fun to see how other authors presented their work,” he explained.  “If the fates decide to smile upon me and help me get my novel published, I’m going to have to get out there and do the same.”

“What did you learn from the experience?”

Holly was truly interested because no one wanted Aaron to succeed more than she did.  She was also well aware that his dislike of people, public speaking, and any social setting would definitely hamper his efforts to promote his work when the time finally came to do so. 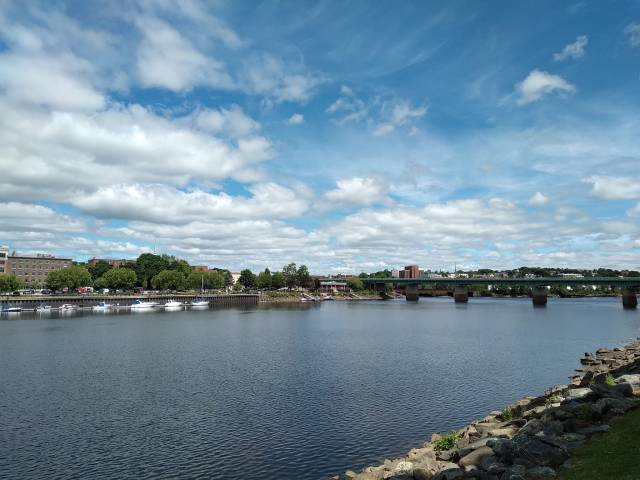 “I learned that you are definitely going to be in charge of my speaking engagements,” he replied without hesitation.  “There were five people at the event.  Two were library employees, who I’m assuming had to be there.  Two appeared to be family members or close friends of the writers.  Then there was me, the lone outlier in the group.”

“I felt so bad for the writers.  They were probably nervous about having to talk about themselves and pimp their work, but to then have only five people show up had to have shaken their confidence.  You know a lot of people, so I’m going to need you to pack the room for me.”

“But you hate talking in front of strangers,” Holly reminded him.

“I know, but my writing is more important,” he said with a heavy sigh.  “I’ve never been good at promoting myself or schmoozing with people, but if I were ever to be granted that amazing opportunity, I’d have to pack away the phobias and take a leap of faith.”

“I’m impressed,” she answered with a smile that lit up the overcast morning.

“Plus, you’ll be there,” he added.  “You’ll give me all the confidence I need, and I’ll just pretend I’m talking to you about my book like we’re sitting here on this bench.  You laugh at all my stories, even the stupid ones, so once I hear your laughter, I’ll be perfectly okay.”

Holly raised her coffee cup to her lips to hide how deeply his comment had made her blush.

“And please make sure there’s snacks,” he added.  “If they can’t figure out how to turn on the air, I at least want people to be able to enjoy a cold drink while they are tortured by my incoherent rambling.”

“It’s more a ranting than a rambling,” Holly corrected him and winked.  “And I promise there will be Snapple and Mounds bars at the very least.”

Aaron beamed.  “Now I need to get this novel published.”

“Because you want to your stories with a larger audience?” she added.

“No,” he answered with a smirk.  “Because I want Snapple and Mounds bars.

Holly rolled his eyes because he was utterly ridiculous.  And for some reason, that entertained her to no end and only made her want to hear more of his silly stories…

Native New Yorker who's fled to the quiet life in Maine. I write movies, root for the Yankees, and shovel lots of snow.
View all posts by Austin →
This entry was posted in Humor and tagged best friends, encouragement, flash fiction, Humor, Modern Philosopher, Sarcasm, satire, self-confidence, short story, writing. Bookmark the permalink.