The Return of the Modern Philosopher

Sad news in Maine today, Modern Philosophers.  Maine’s Little League Champions, a team made up of All Stars from District 9, have been disqualified from playing in the Little Little World Series due to a technicality.

“It has been brought to our attention that a majority of the players on the team from Maine are…ummm…not human,” Little League spokesman Ty Bridges told this Modern Philosopher.  “Some of the other teams protested, so we had to dig through the rulebook and there is a rule stating that all players must be human.”

I had no idea that Little League Baseball promoted discrimination!  “It’s not about discrimination,” Bridges tried to explain.  “The other teams think Maine has an unfair advantage seeing as how their team is…ummm…different.” 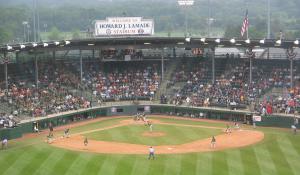 While it’s true that the players on the Maine team are mostly Aliens, Wizards, Vampires, and Ghosts, they are all residents of the state and they…

Native New Yorker who's fled to the quiet life in Maine. I write movies, root for the Yankees, and shovel lots of snow.
View all posts by Austin →
This entry was posted in Humor, Philosophy and tagged Baseball, Diversity, Humor, Little League World Series, Maine, Modern Philosopher, Sarcasm, satire. Bookmark the permalink.