All Rise For The Rookie HR King!

It’s not easy being a Yankees fan in the heart of Red Sox Nation, Modern Philosophers, but it definitely is fun!

I live and die with my beloved Yankees, and when I’m not watching them on TV, I’m following the games on an app on my phone.

This was supposed to be a rebuilding season, but the Baby Bombers have exceeded all expectations and qualified for the playoffs.  Despite that glorious achievement, the best part of 2017 has definitely been following the rise of Aaron Judge, the Yankees’ monster right fielder, who has been the talk of baseball.

He hit 30 homers before the All Star break, shattering the Yankees’ rookie HR record previous held by Joe DiMaggio.  You break one of Joltin’ Joe’s records, and you are definitely going to raise some eyebrows around the Major Leagues.

He then went on to win the Home Run Derby at the All Star Game, firmly cementing himself as a serious Big League power hitter.

And the whole time, he did it all with such humility.  He never showed up a pitcher or the other team when he hit a mammoth home run.  There was no standing at the plate to admire his moonshots.  No dramatic bat flips.  No outrageous quotes for the press.

He would just put his head down and run the bases. 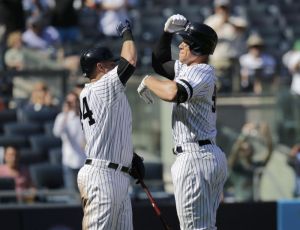 I have seen countless clips of Judge signing autographs for kids before a game.  Whenever he is interviewed, he is well spoken and polite, and manages to steer the conversation towards his teammates and the performance of the team as a whole.

There is no “I” in Aaron Judge, Modern Philosophers.  And that is something you don’t see much of in sports these days.

I was most impressed by how #99 handled a horrendous post-All Star Game slump.  He set a Major League record for most consecutive games with a strikeout.

His batting average was in free fall.

The home runs weren’t flying off his bat.

In fact, the ball didn’t seem to be finding his bat at all.

Every day, the talking heads would go on the air and argue about what was wrong with Aaron Judge.  Some asked if the first half of the season was a fluke.  Others called for him to be dropped in the lineup or even benched.

Judge never lost his cool or spoke out in the press.  He didn’t ask to sit.  He just kept playing.  He went out there every day and helped the Yankees win with his defense, or by drawing another walk to get on base.

During that slump, Judge managed to break the Major League record for most walks by a rookie in a season. 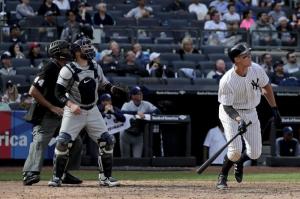 Like my Little League coach always told me, a walk is as good as a hit.  And in my case, it was really the only way for me to get on base because I was no Aaron Judge at the plate.

Sure, I got frustrated every time he struck out, but I never stopped believing in him.

I think that’s what spoke to me the most, Modern Philosophers.  It reminded me of my childhood when I’d get a 99 on a test and my Stepmother would ask why I didn’t get 100.

Nothing was never good enough for her.  I’d bring home stellar grades, but she always wanted more.

So I felt bad for Aaron Judge.  I only had one overbearing Stepmother to deal with, but he had to contend with millions of Yankee fans with inflated expectations, thousands of members of the media looking for a story, and millions more fans who hated the Yankees and wanted Judge to fail.

Through it all, he kept putting on the uniform, picking up a bat, and soldiering on.

This afternoon, on a beautiful September afternoon in the Bronx, Aaron Judge hit his forty-ninth and fiftieth home runs of the season.

That first bomb tied Mark McGwire’s Major League record for most homers by a rookie.

The second blast shattered the record, and made Judge the only rookie in Major League history to hit 50 round trippers  in a season.

Yankees fan or not, you should all rise to honor the young man.  I know it’s just a game, but it’s one hell of an achievement.

6 Responses to All Rise For The Rookie HR King!