Pope To Rock The 4th With Springsteen Concert & Fireworks Show 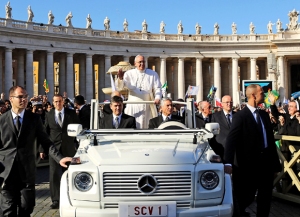 Pope Francis, the “Partying Pontiff”, plans to turn St. Peter’s Square into the place to be for celebrating The Fourth of July.  The Vatican will rock in America’s Independence Day by hosting a Bruce Springsteen concert followed by a fireworks extravaganza sure to have the whole world buzzing.

This Modern Philosopher got to talk about the big day with the Pope as he drove around Vatican City in the Pope Mobile scouting locations for the show.  “You do not even understand how epic this is going to be, Austin,” Pope Francis yelled excitedly into his cell phone.  “I’m watching them put up the stage, and it’s giving me goose bumps.  I think we can pack at least a quarter million fans in here tomorrow to party with the Boss.” 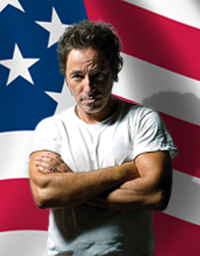 The Pontiff told me he has been a Springsteen fan since the very beginning.  “I’ll toss on Greetings From Asbury Park when I want to mellow out after a hard day,” he admitted.  “Born to Run is still my favorite, though, with Born in the USA a very close second.  I’ve seen him in concert at least a dozen times, and can’t wait to sing along with every song tomorrow night.  If he does Thunder Road, he might go back to Jersey as St. Bruce!”

Why the American rock icon and the focus on the American Independence Day holiday?  “Religion is like music in that it’s universal.  No matter where you’re from, you’ve heard of it, you know the words, it moves you, and it’s something you can talk about with total strangers,” Pope Francis explained over the sound of work crews in the background.  “As for why the focus on America, I think the Catholic Church needs to reach out more to our friends who were born in the USA.  I want my brothers and sisters on the other side of the ocean to know they are in my plans, my thoughts, and my prayers.”

What was he willing to tell me about the fireworks?  “It’s every member of the clergy’s dream to make people see the light,” he answered.  “Tomorrow night, I’m going to make sure the entire world sees the light in every color imaginable.  If the sheer breathtaking beauty of that that doesn’t prove to every last soul out there that God exists, then I don’t know what will.”

Will there be food and drink available?  “I thought I was The Partying Pontiff,” he replied with a loud chuckle.  “What kind of host wouldn’t feed the hungry and give them something to drink?  The Cardinals will be manning grills all over St. Peter’s Square and the Nuns will be overseeing the beverage concessions.  As always, all proceeds will go to local charities, and those you cannot afford a meal will be allowed to feast free of charge.”

“This party is going to rock so hard, so loud, and so long, that I’m sure the Angels will be dropping by to ask us to keep it down!  I hope to see everyone at my place tomorrow.  God Bless America!”

Gates open at Noon.  Bruce plans to take the stage around 4:00 and just play until he’s out of material.  Happy Fourth of July, Modern Philosophers!

Native New Yorker who's fled to the quiet life in Maine. I write movies, root for the Yankees, and shovel lots of snow.
View all posts by Austin →
This entry was posted in Holidays, Humor, Philosophy and tagged Bruce Springsteen, fireworks, Fourth of July, Humor, Independence Day, Modern Philosopher, Pope Francis, satire, Vatican. Bookmark the permalink.