Hanukkah Harry Hangin’ At The House On The Hill

As is tradition, Hanukkah Harry spent the day at The House on the Hill, where we drank Snapple and ate bagels he brought from Bagels on the Square.

“This is such a beautiful house, Austin, but I’m just going to say it,” Harry warned me as he wiped cream cheese from his beard.  “It’s not a home.  This place needs a woman’s touch desperately.  As do you judging from how stressed you look.”

We both had a good laugh at that one, and I held up my Snapple in toast to Harry’s wit.

“Seriously, this place is crying out for someone who realizes that “NYU Dorm Room” is not a proper interior decorating option.  I always make sure I’m careful where I walk when I’m here because I don’t want to smear the chalk outlines on the floor and cause the poor coroner to have to do his work all over again.”

Hanukkah Harry always knew when I needed a good laugh, and he made sure he had his best material for his annual Hanukkah Eve visit.

I tried to convince him to meet with Danny Cashman so he could write for The Nite Show, but Harry just waved off the idea, and thrust another bagel onto my plate.

“Maine’s about 1% Jewish,” he reminded me as he passed me the bacon horseradish cream cheese.  “If I’m going to make it in show business, I’ll need an audience that’s a little more diverse.”

“And stop trying to distract me with your talk of a glamorous life writing for the Late Night King of Maine.  When are you going to find a nice girl to turn this place into something that’s no longer worthy of the cover of Hermit’s Weekly?”

I knew Harry wouldn’t give up, not when he was on this much of a sugar high from three bottles of Snapple, so I explained to him how the dating process had been going.

“Well it’s something at least,” he said with a smile.  “I wouldn’t write a screenplay about it, though, because people like uplifting stories, and that one is just pathetic.  What’s wrong with you?  You’re a handsome guy with an education, a job, a sense of humor, and a wonderful imagination.  You can’t cook up a back story interesting enough to trick a woman into going on a second date?”

Harry laughed, and slapped me on the shoulder, but he could sense that my ego had taken enough of a beating for one afternoon.

“You know I kid.  Just don’t let your love life become like Hanukkah,” he advised.  “Don’t let one drop of heartbreak last another two years, so to speak.”

I nodded and focused my attention on the delicious bagels Harry had brought me from Bagels on the Square.

“I’m going out tomorrow to spread joy to one percent of Maine’s population, and I’d like to know I at least put a smile on the face of my favorite Catholic.”

I smiled for Harry because he deserved it.  The man was a saint (wait…do Jews even have saints?) and he was trying so hard to spread a little Hanukkah Happiness at The House on the Hill.

I promised him that I would make a concerted effort in the new year to go on more dates, and to try my best to see to it that there were a few second dates in the mix.  I could not go so far as to promise any third dates, though.

“I think trying to earn a second date is a reasonable goal for 2015,” Harry said with a snicker as he read the fact inside his Snapple cap.  “Can I suggest you set one more goal before the Holiday Season ends?”

I nodded.  It was the night before Hanukkah began, and there was no way I was going to turn down a request from Hanukkah Harry. 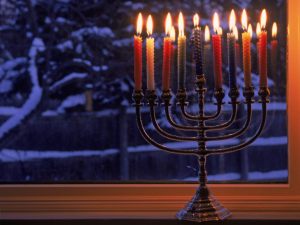 “Put up some decorations.  Some twinkling lights, a giant tree, maybe a wreath, and colorful ornaments would put this place on the right track to being a home.  If you sit here moping in the darkness, Santa’s never going to bring you a new love of your life.”

He got me started by setting up a menorah on the mantel.  I can always count on Hanukkah Harry to be in my corner…

Native New Yorker who's fled to the quiet life in Maine. I write movies, root for the Yankees, and shovel lots of snow.
View all posts by Austin →
This entry was posted in Holidays, Humor, Philosophy and tagged Bagels on the Square, Christmas, dating, Hanukkah, Hanukkah Harry, holiday decorations, Humor, Modern Philosopher, Relationships, Sarcasm, satire. Bookmark the permalink.