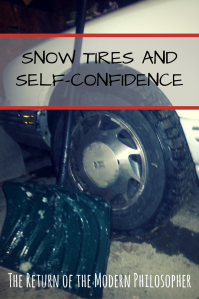 Day 90 — They have been predicting a massive blizzard all week.  Reports range anywhere from six to sixteen inches of snow, with winds up to forty miles per hour.

The Winter Storm Warning stretches over a 24 hour period, which means I’m going to have to drive in it at some point.

Normally, I’d be freaking out, climbing the walls, and losing sleep.  I’m so relaxed, though, that I’m actually wondering if there’s something wrong with me.

There’s a huge storm coming, and I’m calmly binge watching Search Party.  What the hell is going on?

There is something to be said to facing one’s fears, Modern Philosophers.  I’ve taken a totally different approach to my normally overwhelming fear of driving in snow, and it has definitely paid off.

I’ve known about this big storm all week, but rather than allowing it to make me panic and set off my Post Traumatic Snow Disorder, I’ve handled it like a Jedi in training.  I’ve not allowed the dark side to control me, I’ve searched my feelings and blocked out the negative thoughts, and chosen to remain completely positive.

I suppose I’ve finally come to the realization that dwelling on something over which I have absolutely no control is a worthless endeavor.  If it’s going to snow, there is nothing I can do to stop it.  Snow Miser is far too powerful and clearly does not listen to reason. 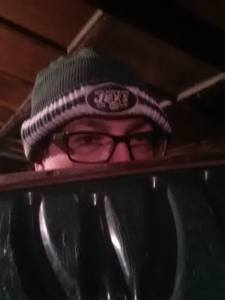 Time has also proven that forecasts can be wrong.  Why worry about a blizzard days in advance when all the meteorologists are actually doing is offering their best guesses based on their high tech toys, satellite images, and messages from their Magic Eight Balls?

I used my background as a Modern Philosopher and applied logic to the situation.  If we were really going to get slammed with sixteen inches of the pure white stuff, there was no way my office would be open.

If for some reason my employers decided to go about with business as usual, and ask us to put our safety at risk by driving in that much snow, I would simply use some of my giant stash of personal time to take the day off.

By thinking that way, I was able to stay calm all week.

Slowly, the weather reports changed.  Sixteen inches had dwindled down to three to six by this morning.  The hourly report made it look like there might even be a gap in the storm that coincided with the end of the work day.

I focused my Deep Thoughts on how much more confidence I’ve had in my driving since I put snow tires on the car.  Even if we did get six inches and I had to drive home in severe snowy conditions, I had faith that my snow tires would keep me from losing control and ending up in a ditch.

The snow started about noon, and shortly thereafter, the whispers started…

Route 1A is closed because of an accident.  I heard there was a fatality…

The whispers of my coworkers are impossible to avoid, and I’ve come to realize that they have been a key ingredient to setting off my Post Traumatic Snow Disorder during the annual 182 Days of Terror.

Usually, when I hear all the chatter about the horrible weather and road conditions, it sends my stress levels through the roof.

Today, however, I was cool as a clam.  In fact, my coworker Sue, who is also not a fan of driving in the snow, asked me how I was feeling about today’s storm.  After I answered, she said she was impressed by how calm I was.

Maybe I’ve finally reached a turning point, Modern Philosophers, which would be wicked awesome.  I plan on living in Maine for the rest of my days, so overcoming this fear of driving in snow is crucial if I want to maintain my sanity.

Did it simply take changing over to snow tires to banish my phobia?  I’m sure that has had a lot to do with it, but every winter that I survive, my confidence grows.  My driving skills have improved, and I’ve learned to block out the bad thoughts and find my happy place in this winter wonderland.

I made it home without a hitch, shoveled the driveway, and now plan to finish my binge watching of Search Party.  If it snows more overnight, I’ll get up in the morning and clear the driveway again.  Then I will calmly and confidently drive to work.

Tomorrow is Day 91, which means I will be halfway through my 182 Days of Terror.

My name is Austin and I am a Post Traumatic Snow Disorder survivor!

You should follow my blog.  I’m always looking for new Modern Philosophers.  Check me out on Pinterest, too…

Native New Yorker who's fled to the quiet life in Maine. I write movies, root for the Yankees, and shovel lots of snow.
View all posts by Austin →
This entry was posted in Holidays, Philosophy and tagged 182 days of terror, building self-confidence, dealing with phobias, Humor, life, Modern Philosopher, overcoming your fears, sarcasm, satire, snow tires, winter in Maine. Bookmark the permalink.

10 Responses to Snow Tires and Self-Confidence